While in Berlin, I had a chance to see a marvelous exhibition at the Berlinische Galerie (http://www.berlinischegalerie.de). It was a mixed media show comprised of artists who currently make their home in Berlin. The title of the show, "Neue Heimat", had a triple message. The first was that these artists had made a new home in Berlin. The second was that much of the work explored questions of homeland, nationality, and the meaning of a home. The third and least obvious was pointed out to me that much of Germany's public housing projects were called Neue Heimat by the government. I love multi-layered exhibitions like this where there is so much to be read into every work. Of course, the theme of the show rises and falls on the quality of the work included, so it was high tide with the wealth of intriguing art on display.

Tea Mäkipää started things off in grand fashion with a to-scale re-creation of an apartment building stripped to the bone of all but its outer frame and interior plumbing. It recalled the triumph of Monica Sosnowska's installation at the Polish pavilion at Venice this summer. 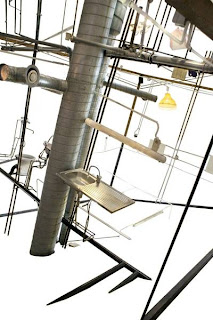 Michael Sailstorfer had another to-scale piece representing an inflatable battle tank. It would take about 30 seconds to puff up to its full phallic mightiness, then, turret first, it would de-tumesce in a most satisfying fashion. If only actual battles could be fought with this work. 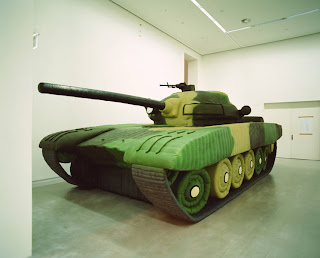 Florian Slotawa had a marvelous idea to question the idea of home-ness combined with the questions of what it means to live with art. He was commissioned to photograph the collection of a museum. Rather than go on site, he had the museum deliver all of the art to his home for him to photograph there over the course of a few weeks. Then the photographs of the objects were displayed in the museum along with an installation sculpture comprised of all the packing materials that were used to bring the art to his apartment. Witty, fun, and full of good questions, I loved this piece.

Maria Vedder did a video work that placed her camera under opaque Plexiglas flooring in a public space. The upward-looking rhythms and geometries of the people as they passed over the camera were beautiful though vertiginous. The video display was placed above a door adding to the disorientation, since it was a place where it was just possible there could be a window. The light of the video was believable as daylight streaming in. First-rate video work. 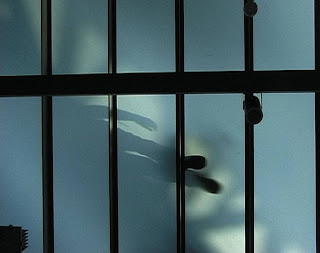 Last and not at all least were the drawings of Jorinde Voigt. This is an artist I suspect is not so well known yet in the US. Her complex, layered, and text/number based work is not easy to parse, yet yields pleasures of both the intellectual and visual kind. Reproductions here would not read well enough to do her work justice. Check out her website and begin o explore this remarkable artist. http://www.jorindevoigt.com/

There was yet more to see in this rich, varied show. After the Berlin in Lights show this Fall at Carnegie Hall, perhaps one of the NYC museums would find it an interesting parallel to mount this show here as well. It is further documentation that Berlin is one of the true centers of creativity happening now world-wide.