Dispatch from the Berlin art fairs

First, apologies for such a long break since my last post. There has been plenty to write about, but I just haven't seemed to find the time. Sorry. There will be plenty of posts in the coming weeks.

As I have for the past 3 years, I went to Berlin for their collection of Fall art fairs. The main event is the Art Forum at the Messe Halle with the usual attendant satellite fairs Berliner Liste, Kunstsalon, and Preview augmented this year by newcomer, Art Berlin Contemporary.

Berlin is famous for its contemporary art scene and artist rich landscape. In past years, this has resulted in a collection of art fairs that rewarded the patient fair-goer with artists and artwork not to be found in the more homogenized fairs of Basel and New York. It seems that this pleasure is reaching the end of some natural cycle. Art Forum was as staid and conservative as many of its sister fairs have become, perhaps in reaction to a tighter market and perhaps just because taste is turning in some ineluctable way. On the other other hand, the satellite fairs are just becoming bad. Where Liste, Kunstsalon, and Preview were once highly uneven yet rewarding experiences, they have morphed into embarrassing collections of I-don't-know-what. Maybe it is my taste that has morphed, but it seems to me that, for example, the Kunstsalon in which I first saw the work of Thorsten Brinkmann has been MIA for some time now.

But I swore when I first starting writing this blog that I would focus on the positive. Of all the fairs, the only one with a frsh perspective and more than a handful of engaging work was the Art Berlin Contemporary (ABC). The full name of the fair was ABC DEF (Defining Emerging Future) which asked of its exhibitors to limit their display to one artist's work which could fit on a standard folding table. In addition, each work should be a model or maquette for a public art work.

This is not exactly a new idea, but it's a new manifestation of the art-fair-as-curated-space idea. Volta Fair's New York incarnation the last year mandated single artist booths and is an example of the trend. While some gallery owners groused about the limitations of only having a table to work with, I, for one, loved the clarity of purpose and attendant power of focus. Certainly there were failures and miscues, but I think this kind of creative fair structure will be the wave of the future. The art-fair-as-supermarket model seems to be having hip and knee pain as it struggles with both size and age. ABC seemed lean and fresh and it's best examples were a delight.

Galerie Krinzinger from Austria showed Werner Reiterer's "Draft for an Altar". It consisted of a halo-shaped ring of neon, a cell phone, and note that read, "back in 5 min, God". I was sold just from that, but I chuckled with evil pleasure when the cell phone would ring for no one in particular every few minutes. 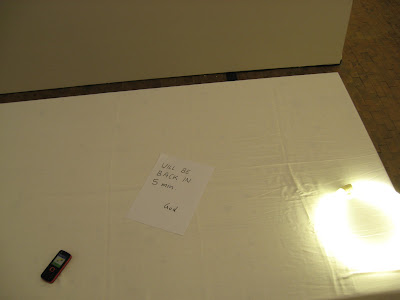 Galerie Albrecht was showing Dennis Oppenheim's "Proposal for a Building Complex". Probably best seen from above: 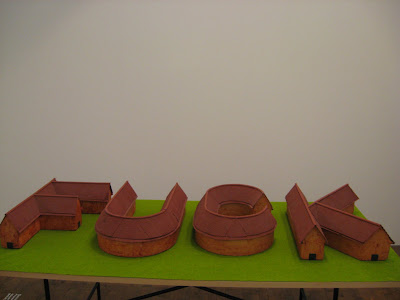 Galerie Nordenhake had a more challenging display by artist Johan Thurfjell. "Eight Dreams and the places dreamt about" featured a fairly conventional forest diorama complete with cabin, lake, boat launch, etc with colored pins marking certain spots. On the wall, color coded to the pins, were eight "dreams" which allegedly happened in the places described in the diorama. I was taken by the supposed specificity of the work which seemed to show all of its hand, but obviously everything about this work is subject to speculation and interpretation. Apologies for the not-so-great small pictures: 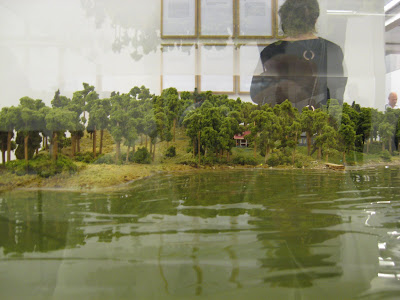 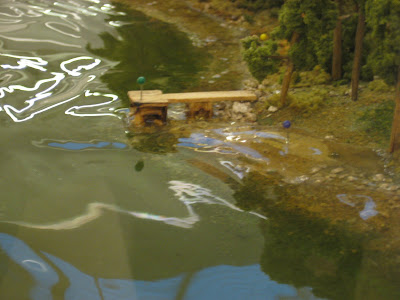 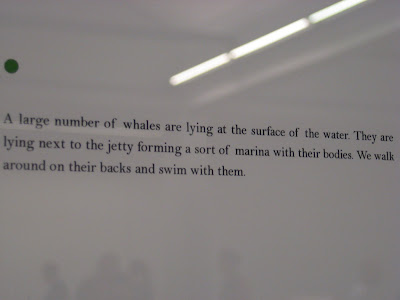 Dominik Lejman was the choice for Berlin's Zak-Branicka Galerie. As one would expect from this clever artist, his video was calculated to display around the mandated table, not on it. This cheeky detail would not have mustered a passing comment at a normal fair. At this one it was high cheek.

As I mentioned above, I see the art fair model that we have lived with for the last few years to be open to change if not actually under attack. Fairs with a unifying theme or raison d'etre seem much more lively and worthwhile than a huge building crammed with as much art as it can hold. Even more timely in my view is to abandon the fair entirely in favor of gallery oriented events that having been gaining favor around the world. For example, Gallery Weekend Berlin has been a go-to weekend for some years now. I went in 2008 and found it to be an extraordinary way to be introduced to the artistic life of a city. Dozens of galleries had new show, museums times their programs for the weekend, and collections and studios opened their doors. This is just like the ancillary activity during a fair except that by going to the galleries themselves, one is introduced to a much more comprehensive view of that gallery's program (or better, the work of an artist in whom you are interested). New York has tried this on for size in the recent 57th St Gallery Night and the upcoming New Yorker Passport to the Arts. While both are smaller in scale and scope to the Berlin weekend, I can easily see the trend moving in that direction. At least for me, I would rather visit the city and an actual gallery rather than an antiseptic convention center ill-suited to show art.
Posted by Evan Mirapaul at 10:08 PM