A visit to Berlin is not defined by art fairs alone. Though I was introduced to one new and interesting gallery, Feinkost, at Art Forum, Berlin was its usual dependable self in providing a variety of satisfying experiences away from the fairs.

I guess it's no surprise that I had not been to Galerie Feinkost before. The gallery is in a converted convenience store directly across from a northern border of the Berlin Wall quite a distance from any of the standard gallery districts. But their Art Forum booth was one of the true successes for me this year. They showcased two artists, Ignacio Uriarte and Arcangelo Sassolino, to exceptional effect.

Mr. Sassolino makes sculptures that have at their core some kind of mechanical or engineering component. These mechanical components are used to destructive ends, usually interfering with the environment in which they're placed. Noisy and dangerous, I found the work completely engaging. The work at Art Forum was relatively mild for this artist consisting of a 9 bar air cylinder connected via a computer to a small plastic water bottle. The computer directed the cylinder to alternately inflate or deflate the bottle. When inflated it was somehow perfect and unharmed. When deflated, it was always a different, disastrous deformation of itself. One could not imagine how it would re-inflate to its former self. Inflation and deflation was a deafening crackle of plastic. 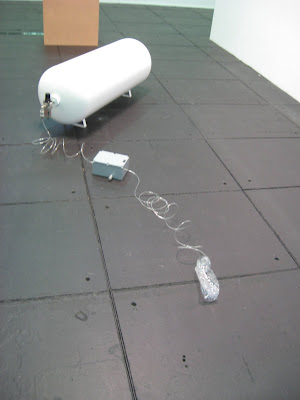 The gallery invited me to a concurrent exhibition at the only-in-Berlin exhibition space Micamoca: 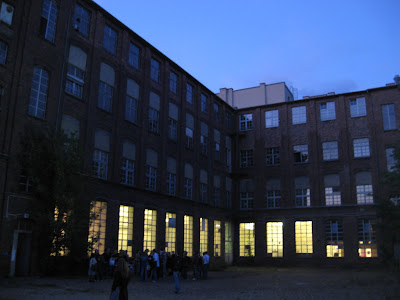 There I found a more typical example of Mr. Sassolino's in that it existed solely to destroy it's surrounded space: 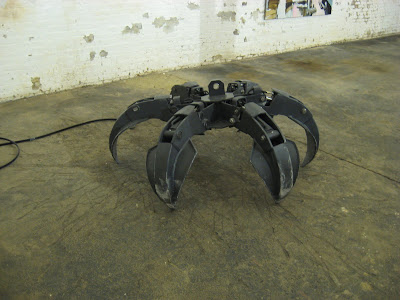 Detail of it's clawing effect: 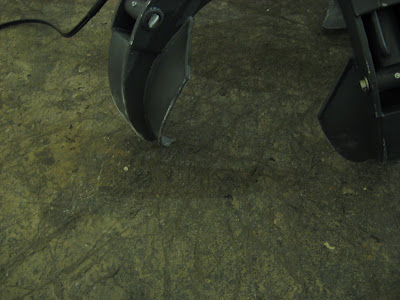 The Sassolino work I didn't see was A huge wall of cor-ten steel held in place by a massive magnet. At rare intervals, a computer would tell the magnet to fail allowing the steel wall to fall a few inches to the floor. Over time, the wall would pound deeper and deeper into the floor; a testament to the inexorable march of time and mass.

Ignacio Uriarte was the other artist Feinkost was showing at Art Forum. Mr. Uriarte exploits office materials for his practice. Other artists have plumbed this territory before -- pens, typed pieces, faxes, etc -- but Mr Uriarte explores new corners of the office both with his diverse materials and single-minded practice. I was impressed again and again what this artist achieved with extremely simple materials. At the fair, I was caught by a Sandback-like display made only from folded paper: 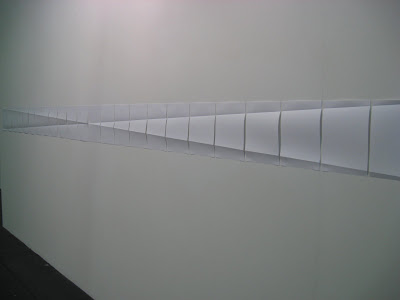 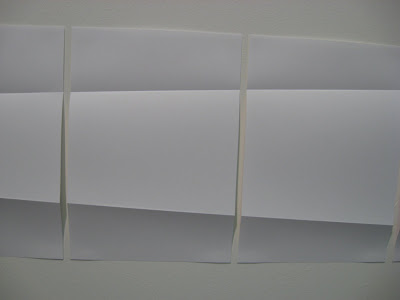 I bought a typewriter piece that used only the left and right hand quotation marks. If you weren't told how it was made, the mark-making technique of the piece would be a mystery.

This artist also works with office paper, office software, and printer ink among many other media. Take a look.

I always go to Daimler-Chrysler Contemporary when I'm in Berlin. the shows there are always smart and concise. Thios visit didn't disappoint. Continuing with the them of fabulous work acieved with spare or simple materials, I loved Georg Herold's untitled piece using particle board bookshelves and cinderblock bricks. While not as explicitly destructive as the Sassolino pieces, I was mesmerized by how the piece seemed to balance on the point of failure. There was incredible tension in such a static work: 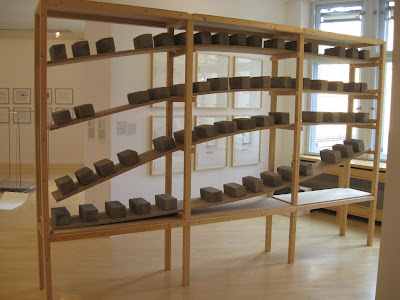 I made a first time visit to the About Change Collection on Museum Island. They had a text heavy group show that was sure to appeal to me. My favorite was a Gonzalez-Torres-like piece by Vincenzo Latronico in which the public is invited to take away parts of the work. Unlike Gonzalez-Torres, in which each piece in the paper pile is identical, each piece of paper in Mr. Latronico's work are unique. Each page you take with you deletes that page from an awesomley varied whole. I quote from the About Change website:

The Italian Vincenzo Latronico explores the various ways of interpreting and composing a text. Beginning with eight text sequences, each comprising five parts, the young author has written down all the possible combinations thereof, yielding a total of 32,768 short stories, or 32,768 variations of a love story—each independent of the other, and utterly unique.
Latronico’s debut novel Ginnastica e Rivoluzione was released in 2008 by the Italian publishers Bompiani. For Next time, perhaps (2009), he drew inspiration from the French author Raymond Queneau (1903–76), who in 1961 published One Hundred Thousand Billion Stories, an experimental ensemble of ten sonnets. Queneau constructed the book so that the fourteen lines of each sonnet can be individually turned over, and consequently combined with the lines of the other sonnets. Thus, potentially, this thin booklet of 14 sonnets contains “one hundred thousand billion poems.”
Whereas Queneau’s one hundred thousand billion combinations and various poems could never be actually seen in its entirety, Vincenzo Latronico sought to render visible the sheer volume of his 32,768 love stories. Each story was printed on a single page, resulting in a total of 32,768 pages which—each containing its own love story—are now stacked in the About Change, Collection . Visitors are also invited to take a page, as a variation of the piece Next time, perhaps. The English version of the work Magari la prossima volta (2009) is now on view for the first time outside Italy, and has been adapted especially by Vincenzo Latronico for the About Change, Collection.

So, despite wan or meager offerings at the fair, Berlin remains a vibrant and eclectic place to see art. Count me in for Gallery Weekend next May.
Posted by Evan Mirapaul at 12:44 PM