I've been invite by the acclaimed Polish photo magazine, Fotografia, to contribute an article about some of the photography I saw during Armory week in NYC. An upgraded version which is much more specific and illustrated will appear in the forthcoming edition of the magazine. Check out their website for my article and other timely writing on photography both in Poland and internationally. In the meantime, here's a blog version of the article including some non-photographic work I found particularly noteworthy:

Readers of this blog will remember that I mentioned Katarzyna Majak in my recent posts about my trip to Poland. My first encounter with this artist was as a juror in an online photocompetition created by Jessica Porter at her Gallery, Raandesk. Ms Majak won first prize and now has her work on display at the gallery. Check it out. She is also giving a talk at B and H Photo about her work. Details of the event and a short bio are below. If you're in NYC this week and are curious about what's happening in the extremely vital Polish art scene, I suggest you register to go. Recommended.
Katarzyna Majak "An Artist On The Move" 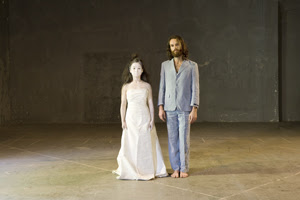 Katarzyna Majak is a fine art photographer from Poland, an Ex-Soviet Bloc country, who has lived through a period of many changes; economic, societal, and cultural. She will present several projects, both completed and in progress to bring insight about her very personal path to becoming a photographic artist. Katarzyna's story is one of a woman who finds freedom creating art and whose work reflects the themes of change, self-awareness, rites of passage, archetypes, personal freedom, and shamanism. She believes this personal search for freedom through art echoes a greater universal impulse.

Has recently defended her PhD on how clothing constitutes identity in selected photographic projects at Multimedia Communication Department of University of Fine Arts in Poznan (Poland). Is an active visual artist, a writer, a photography lecturer;  member of editorial board and a regular contributor to Kwartalnik Fotografia (‘Fotografia Quarterly' - a high-end Polish photography magazine), cooperates  with 1000 Words Photography Magazine. Awarded a scholarship by Anderson Ranch Arts Center in Colorado and the Ministry of Culture in Poland; an associate artist at the Atlantic Center for the Arts in Florida. Has written for exhibition catalogues, is an author of an introduction to 4 Photography Biennial in Poznan and ‘LAB EAST' - a book on 30 Eastern European photographers. Curated and coordinated shows both in Poland and abroad. Participates on photo juries and reviews portfolios at photo festivals all over Europe. Her work has just been included in The Collector's Guide to New Art Photography Vol. 2. Represented by Ego Gallery and Zderzak Gallery.Her work can be seen at: http://www.katarzynamajak.com
Link to BandH website page for registration: http://www.bhphotovideo.com/find/eventDetails.jsp/id/925
Posted by Evan Mirapaul at 4:07 PM No comments: