A belated part two and part 3 for Berlin. I didn't have internet access with my laptop in Bratislava, so I had to wait to write this. I'll confine part 2 to the main Art Forum fair and I'll dedicate part 3 to the satellites.

First, since the economy is on everyone's mind, I'm sure some readers will be curious about the mood of the Berlin fairs. I wasn't there as a journalist, so I have no accurate reports on sales or lack thereof. (I think it's interesting that the same galleries we didn't trust when they reported fabulous sales in boom years are suddenly trusted when they give reports these days.) I can say that attendance at Art Forum was robust. Kunstsalon and Bridge were quiet the days I went, but Liste was quite crowded. The galleries I spoke with at Forum all seemed to be having an ok show. I did speak with a few good galleries at the satellites who said they had not made a sale. How that corresponds to real statistics or a measure of what went on I couldn't say.

I go to the Berlin fairs because I find that the work is a little off the beaten path; there's a good chance I'll see work I wouldn't see elsewhere. I found Art Forum a little tame in this respect this year. While there were still galleries present who don't come to U.S fairs, work that German galleries find too expensive to travel with, and some emerging art that was new anywhere, overall I found Forum more conservative than it's been in the past. The satellites were another story, but that's for part 3.

As always, Kicken Gallery had an amazing booth. There were prime examples from his usual suspects: Dieter Appelt, the Blumes, Peter Keetman, New Topographics, Neue Sachlichkeit, etc. The most noteworthy for me was a series by Hans-Christian Schink that deeply relates to my recent post on Chris McCaw. I will save that, too, for its own, later post. (http://www.kicken-gallery.com/).

Nusser Baumgart Contemporary had a booth devoted to Albert Weiss. I wrote about a few of his pieces at Pulse NY last year during Armory. This is small-scale precise art, but it's smart and engaging. I also include him in my Creative Destruction list. Worth a look and not in the US except for fairs.

Anatoly Shuravlev had a few large scale fascinating works at GMG from Moscow. This is work that is impossible to re-photograph or to reproduce. From even 2 yards away, the piece seems to be a solid black obelisk with a reflecting plexiglas surface. On closer...no, on very close inspection, one can find that there are tiny white outlines of an island country. Japan was one and the UK was another. It spoke volumes about power in the face of nature and also about a nation's place in the literal world. The gallery either had trouble with english or were not in a helpful mood, so I'm not sure if the work is photographic or not. The website is not helpful on this count.

Rubicon Gallery from Ireland had some intriguing work from up-and-coming Irish artist Liam O'Callaghan. In my opinion the work was uneven, but I really liked some of the "Designs for Public Monument that won't happen". It was among the best of what seems to be becoming a mini theme of sculpture that was created only to be photographed. Add Sara Vanderbeek, Hannes Schmidt (see previous post), and the current show at Bellwether among many others to the list. I also find confluences between his sculptures using found objects with the sculpture of Thorsten Brinkmann. While Mr. Brinkmann makes sculpture to stand in 3 dimensions rather than to photograph, I do see some kind of affinity. Here are two of my faves from Mr. O'Callaghan: 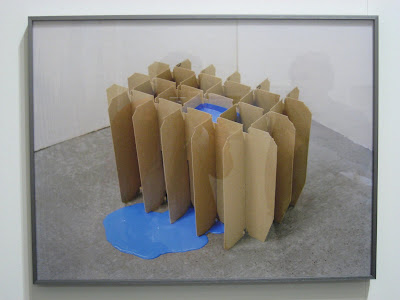 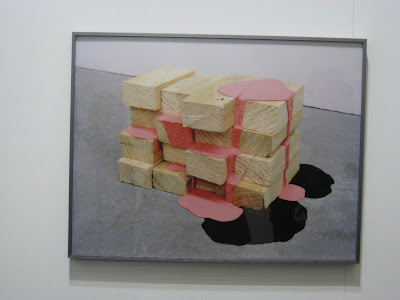 Add to this list the work of Kaspar Bonnen at GalleriChristina Wilson from Copenhagen. Mr. Bonnen has created in the series what I would call action texts. Like Augusta Wood from Cherry+ Martin Gallery in LA, he creates a text in nature out of natural materials. Unlike Ms Wood, this piece is a sequence that begins with an abstract sculpture. As the scupture devolves, we see that the sculpture was made up of pieces of text that, when completel dismantled, spell the sentence that is the title of the piece: I said I lost you but the truth is I never had you. 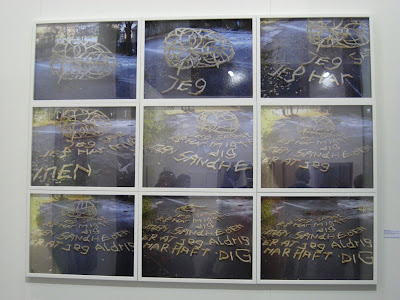 Berlin gallery, Crone, had an interesting twist on the painting/photography axis. In a booth that seemed to be filled with identically sized vernacular photos: 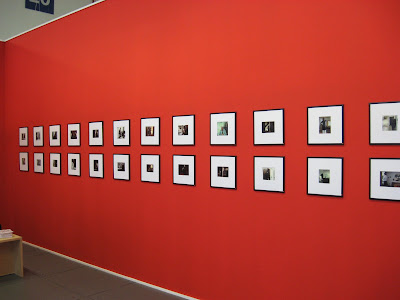 One moved closer to begin to wonder if these were photos or not: 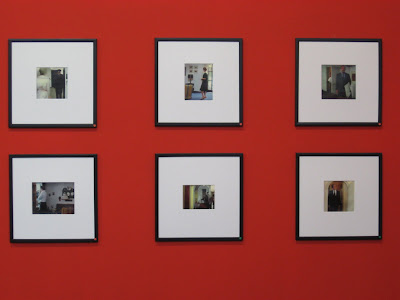 Until finally on close inspection we see the brush strokes and the texture of the canvas: 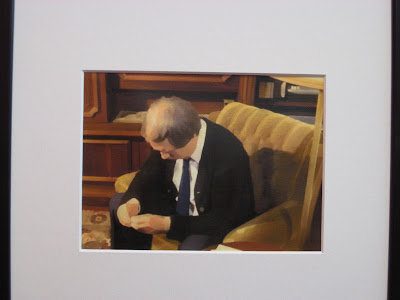 In a world where photographs are constantly judged to be painterly, I find it refreshing to find a painting not from the photo-realist school to be "photographerly" with a clear nod to Walker Evans polaroids. In the end, though, perhaps these were too easy. One Berlin insider I spoke to found it disparaging of the work that it sold out of the booth immediately. Does popular mean bad? I don't think so, but I don't know if this is work I would find stimulating for years on end.

Galerie Guy Bartschi from Geneva had one of the better Georges Rousse I've seen in awhile. I loved in how many planes he could get this piece to work. The painted geometric shapes float in the room remarkably succesfully. And to see it up close is to see how many angles and corners he used in the actual space of the room. 3D, 2D....I could look at this one for years. 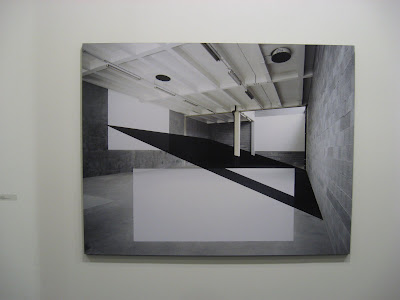 Sam Durant was represented by Praz-Devellade with some beautifully macabre and politically charged maquettes of gallows. These were miniatures of actual gibbets used in famous US executions in history. It was an example of political art that was in short supply, but maquette art seemed to be everywhere I looked.

September Gallery from Berlin had a few works by Nikolaus Untermohlen. There's a monograph about the artist. Like too many others, he died young from AIDS leaving a relatively small opus to history. The work pictured here would be a candidate for Creative Destruction, but there is so little work to look at it's hard to say whether it's a significant part of his practice. 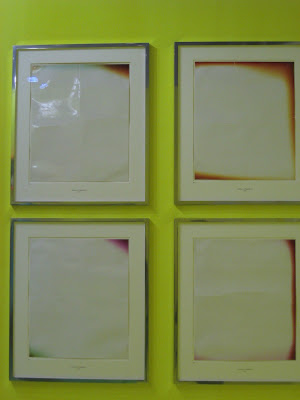 Leipzig gallery Eigen + Art had fine work by Ricarda Roggin. It seemed to be an unholy marriage between John Chamberlain fetishistic car advertisements. I liked it. 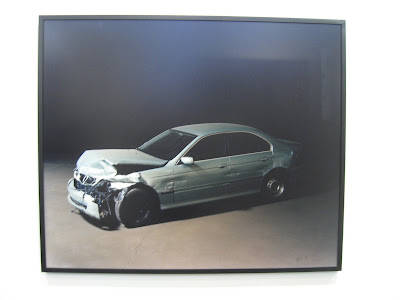 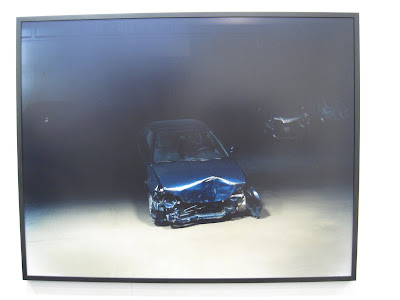 More from the satellites coming soon.....
Posted by Evan Mirapaul at 7:52 PM