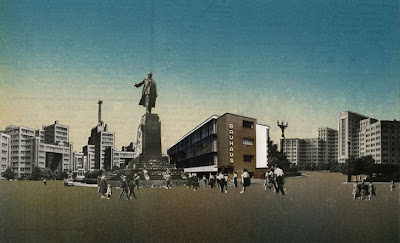 I had the opportunity to travel to Krakow from Berlin with my friend Asia Zak (pronounced, basically, asha zhahk), who is a native of Krakow and a gallery owner specializing in Polish and easter european art. It was a fun, quaint place to see for the first time. There are many galleries--some of them at a very high level like the Starmach Gallery--but my one good find was at GaleriF i S>KA looking at the work of Jan Dziaczkowski (basically, yawn djoshkovsky). Amid a varied and large output, Mr. Dziaczkowski in this case uses Soviet era postcards as a base for collage. He inserts pictures from more western capitals in a rumination about how those places would be changed if the iron curtain had fallen farther west. They are presented as postcards--stamps, writing and all. I thought they were great. Check out his website at:
http://www.dziaczkowski.pl/.

My last day in the area I took as an opportunity to see Ausschwitz and Birkenau concentration camps. I have nothing to add that hasn't already been said about these places except for a few personal experiences. Night falls early in this part of the world at this time of year, and my tour was the last of the day. This meant that we were mostly walking around the fog-shrouded, nighttime grounds of Ausschwitz that was empty and mostly dark. It didn't take Steven Spielberg's imagination to feel the creepy scariness of the place. Seeing the guard towers evaporate into the chill mist heightened the empathy of experience beyond belief.

As soon as I got back from the tour, it was time to board the overnight train to Bratislava. Being in the Krakow train station (not the image of modern train travel) after having just seen the selection platforms at the concentration camps sent my imagination racing. The train was older and somewhat creaky ( actually it was fine but I'm trying to paint a picture here). The porters and conductors were surly and impatient, so as I locked the door to my sleeper, I had ample opportunity to think about ominous history. The train left on time with my mind still racing. An hour later we lurched into our first stop. I hadn't given a moment's thought to where the train might stop on the route to Bratislava. I raised the blind to see where we were -- Ausschwitz!! No kidding. Creeped me out. A lot of ghosts on that platform. The perfect Jewish boy Halloween train ride, coming to a Six Flags near you soon.
Posted by Evan Mirapaul at 6:37 PM