Before I go off on my rants and raves about the recent slew of art fairs centered around Art Forum Berlin, I thought I would touch on a couple of fave shows around town. There are always openings galore in Berlin at fair time, and this year did not disappoint.

Berlinische Galerie came through with another satisfying and fascinating set of shows. (http://berlinischegalerie.de/) I wrote about the "Neue Heimat" show some months ago commenting about what a smart, underknown cultural spot this is. This time around, there was a fine new video overview (which I will leave to others to write about), and an amazing show of panoramic photos of Berlin from 1949-1952. I quote from the website and press release:

After WW 2, rubble clearance had made considerable progress and rebuild had begun, a remarkable photographic inventory was done in East Berlin. By order of the magistrate of the capital of the GDR an -- up to now -- unknown photographer documented central places and areas that were of importance concerning the urban planning in the early 50s. He captured the Pariser Platz and the Schloßplatz area as well as the works on the Walter Ulbricht Stadium or a sand storage area in the outskirts. In order to adequately picture the void and the vastness of the destroyed city as well as the remaining urban structures, the photographer made horizontal turns with the camera and thus produced sequences that -- once brought together -- turned into panoramic pictures.
The concealed quality of these pictures was lately discovered by Berlin photographer Arwed Messmer. By means of digital mounting of the sequences, he created synthetic large-size panoramic portraits that show the destroyed Berlin as an empty stage. Thus inspired, the Photo Archive of the East Berlin magistrate, preserved by the Berlinische Galerie and documented in the catalogue “Ost-Berlin und seine Bauten. Fotografien 1945–1990”/”East Berlin Architecture”, was searched through anew. Thus the exhibition operates at the interface between applied photography and new photographic technology as well as between collective memory and an unfamiliar optic experience.

This show was presented so smartly. In one room were the original photos - sometimes shown indididually, and sometimes shown in their original archive albums and books. One of these was a panorama of every building on Unter den Linden Strasse. There has been quite a bit of buzz lately about a Japanese book showing every building on the Ginza that is significantly similar to Ed Ruscha's seminal Sunset Strip book and published more than 10 years earlier. Well, here is another similar project, just as objectively/flatly represented and predating the Japanese project by decades. I love it!

In the next room were modern digital panoramic enlargements. Made from the original negatives, the modern prints were amzingly sharp, clear, and seamless. One could really walk into them. Here was a case where scale was essential and added immeasurably to the experience of the work. A map that correlated all the photos to their actual current location was the cherry in the archival sundae. This was a show that would have been a a wonderful addition to ICP's recent "Archive Fever" in that is uses, reexamines, and reimagines voluminous historic data into a changed modern perspective.

Claudia Angelmaier’s works quote the great masterpieces of art and their history. She approaches pictures in the form of reproductions that she finds in books, postcards or slides. These then become the material of her works. Hence, the motif is no longer the “original”, but the photographic reproduction that also leads to the work’s familiarity. Angelmaier’s photographs address the question of our viewing habits in a world flooded with visual media. In the series “Works on Paper”, Angelmaier works with various art postcards that share the themes of the Rückenfigur (a figure seen from the back) and the Romantic landscape. She photographs the postcards in such a way that, although they are seen from the back, the viewer is also confronted with the front – the picture side. The art postcard acts as a souvenir, a memory of the artwork; its mass circulation contributes to the work’s popularisation. Angelmaier’s works elevate the art postcard to the status of a tableau. The just visible image on the front – the reproduction of the artwork – is given back its original dimensions. Nevertheless, the contemplative viewing of the picture is disturbed by the way in which it has been photographed. 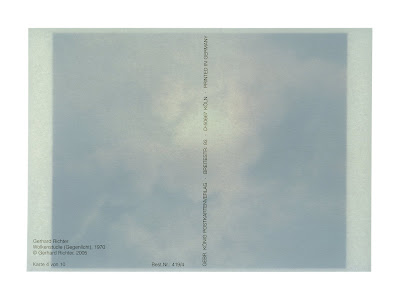 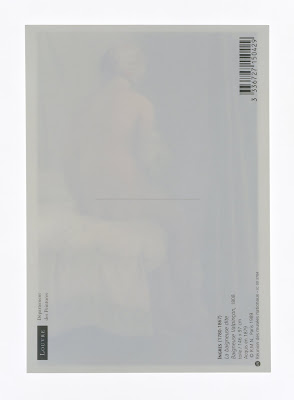 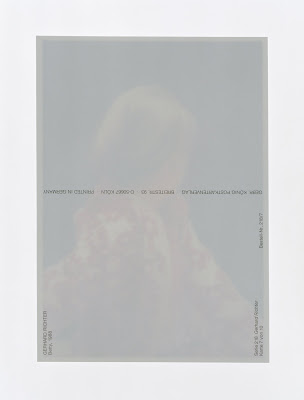 This work has parallels to me to Tim Davis' series "Permanent Collection". In both artists' work, the recontextualized art is presented in the size and shape of the original art. In both cases, we are asked to see how our culture obscures or distorts how we see iconic art. They both even chose one work in common: Gerhard Richter's "Betty". This is an artist to watch.

Last I want to mention is the Hannes Schmidt, "State of the Process" show at Nice and Fit Gallery. (Nice and Fit website) This is another Berlin gallery in which I consistently find engaging, smart, and beautiful work. The work of the artist that most spoke to me were photos of constructions/scuptures made in the gallery that were photographed just as they fell apart or failed. In this sense, the photograph serves as a document of a scupture that the eye could not have seen at the time and which no longer exists. Truly, photography is the only medium in which they could exist as art. Many were as clear as Klee drawings or as complexly simple as constructivist collages.

They also reminded me strongly of an exhibition of 82 photographs made between 1984 and 1987 by Peter Fischli and David Weiss at Matthew Marks Gallery. From the website:

The Equilibres photographs are images of household objects and studio detritus arranged to form tenuously-balanced assemblages, and it is from this moment of passing equilibrium that the series takes its name. The group includes both color and black & white photographs and takes as its subtitle the phrase, “Balance is most beautiful just before it collapses.” To this end, the emphasis in these works is on the beautiful, playful, transitory arrangement of the objects in space, where chairs and brooms, cheesegraters and wine bottles are choreographed into moments of delicate suspension. The assemblages do not simply look temporary; once photographed, they were disassembled, and today these photographs are the only record of their existence.

Hannes Schmidt joins an august line-up of artists to create temporal and temporary work that use the hundredths-of-a-second eye of photography to create an object that only a camera can see. 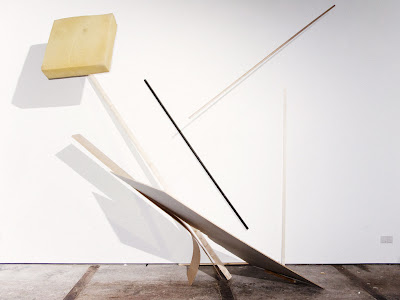 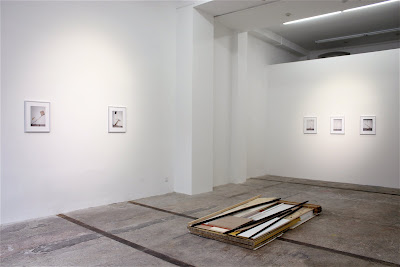