After going to Budapest for the first time 2 years ago, many people I know have been urging me to go to the opening week of the Bratislava Month of Photography. This is the baby of Vaclav Macek who is the founder of the festival and the director of the Central European House of Photography. Finally, this year I went.

Bratislava is a place that seems out of another time. It seems still, even after many post-communist years, to be caught in an eastern bloc haze. While Prague, Budapest, Warsaw, and Moscow have all launched into a commercial/capitalist phase, Bratislava has lagged behind. Part of me loves this. I love being in a place that has resisted the most egregious commercial impulses and remains in a kind of benign time warp. The other part of me sees the poverty, neglect, and lack of resources that keep this country from really moving forward. I mean, it's crazy to think that this city is, almost literally, walking distance from Vienna -- 40 minutes by train. So imagine if you lived in Manhattan, that lower Westchester was like East Berlin in 1985. It's not THAT stark, but it's that close in geography and almost that different in mood.

The reason I wanted to go is that I was sure that I would find art there that would be off the beaten track. Month of Photography has a fine exhibition program that brings in some big names. This year included Koudelka, Giacomelli, Pierre Gonnord, and Paolo Ventura. These were fine shows, but I can and do see them everywhere. I was more interested to see more unusual things (at least to my eyes). There was a fascinating show by the mid-career Slovak artist, Daniel Fischer. More on him in another blog, but I heard an interesting thing about Slovak artists when I mentioned him to a prominent eastern euro curator. She said that many of the photographers and artists we think of as the cream of Czech art, are actually of Slovak origin. I was told that the region is basically made up of Bohemians, Moravians, and Slovaks. Bohemians and Moravians are in what we now call Czech Republic, and Slovaks are Slovakian. But they have mixed and mingled for generations with the distinctions between them lost to those of us in the west. To someone who lives there, it's clear that the creative and artistic impulse of the region has always had a clear Slovak vein. Cool.

I can't cover everything I saw, but here are three highlights.

I started at the student group show of the Academy of Fine Arts and Design. Lots of fine work, but the one standout was Peter Čintalan. Mr. Čintalan focused on the aging and retired of Slovakia realizing that their pensions were tiny fractions of the pensions of retirees to the west. He took photos of them as they left a supermarket and meticulously catalogued their age, name, pension, distance traveled on foot to the store, items bought, cost, and any physical infirmities they might have. I liked the cool eye of the work combining a passionate, caring voice with an unsentimental approach. Here are a few installation views including a crappy shot of the wall text. It's poorly translated and hard to see but worth reading. 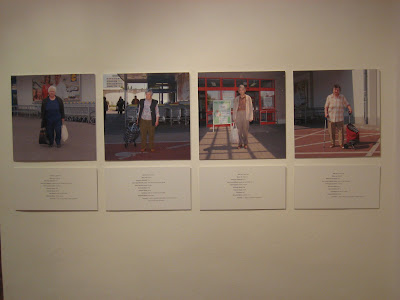 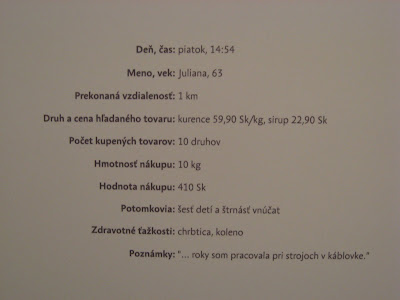 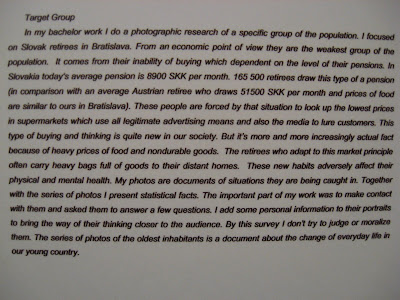 Another good show was by artist Sylva Francova. She won best portfolio last year at this festival. Her work photographs horribly, so I encourage you to click on her website to take a look. I didn't take any pictures. The series I saw is called "Views". It's an interesting twist on the Becher typology. Where the Bechers photograph different but similar objects from a meticulously identical perspective, Francova, photographs the same thing from a meticulously changing perspective. In this case, she photographs the same view out of her apartment building from each successive floor. Of course I say "the same view", but since it takes time to move from floor to floor, the view cannot by definition be the same. It's a clever take on typology combined with "action" photography.

The absolute gem of a show for me was "Behind Walls - Eastern Europe Before and Beyond 1989" which originated at the Noorderlicht Festival this year (note to self: go to Noorderlicht Festival). Looking at the website for the Noorderlicht show, I realize that the Bratislava edition was substantially changed. Many of the artists I found most compelling seemed to only be shown in Bratislava. Some of the work I already knew from my Hungarian and Polish contacts -- fine work by Gabor Kerekes, Lenke Szilagyi, Przemyslaw Pokrycki, and Frank Rothe were all known to me. Kerekes and Szilagyi are certainly among the the best of living Hungarian photographers and would be widely known and collected if they were in the west. A few screen shots of Kerekes' work: 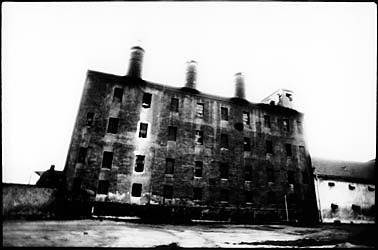 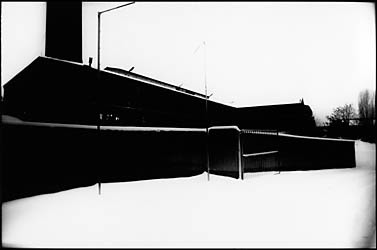 But there was fascinating work I'd never seen before. Much of it seemed to be earlier work that could now be re-worked, re-imagined, or re-contextualized in a society with fewer restrictions. A great example of this was the work of Belarus artist, Vladimir Shakhlevich. In 1980 he was on assignment to photograph workers for an honor roll. The shots were taken in front of an improvised backdrop and had the workers wearing their best clothes, medals, and other props of a successful collective while the shot was cropped to exclude any extraneous information. Now, in 1989, he printed the uncropped images. We see now the staged, formal, and (I suspect) artificial pomp of the photos. Our perspective is shifted 180 degrees. 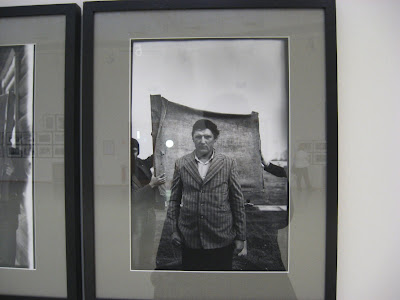 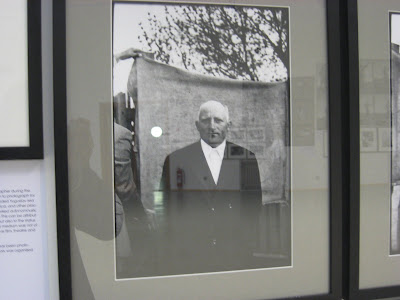 Another re-imagining of Soviet life was done by Sergey Kozhemyakin. I quote here from the Noorderlicht website followed by a few exhibition shots:

Sergey Kozhemyakin makes new prints from old, frequently damaged negatives that he found in the wastebasket of a cheap photo studio in Minsk. The photos are of children posing in a hotchpotch of Russian clothing styles. The attire ranges from the kokoshnik (a traditional Russian women's head-dress) and uniforms from the Napoleonic era to contemporary military uniforms and insignia. For Kozhemyakin this monotonous succession of children in nationalistic costumes is symbolic of their spiritual situation. Under the totalitarian regime everyone must be alike. Outward appearances came before inner self, and was definitive for actions. In this perspective, the children's photographs are a tiny detail in a great mechanism that was directed toward suffocating the individual. 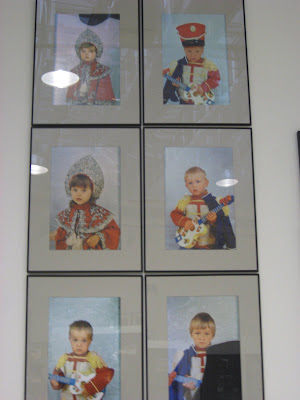 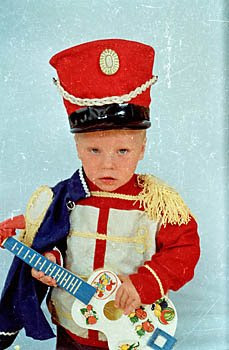 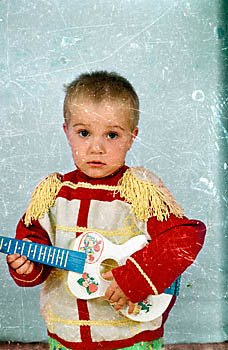 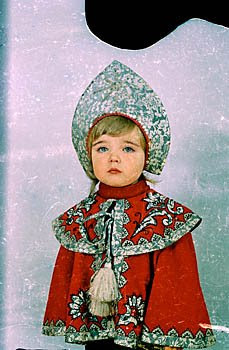 All in all, it seems that there were at least 35 artists in this show. I can't mention them all. The work was of varied quality though much of it was of a high level. The catalog is still available and worth taking a look at though the layout is awful. The last artist I'll mention is Belarussian Uladzimir Parfianok. Again I quote from the Noorderlicht site:

Towards the end of the 1980s the Belarussian Uladzimir Parfianok did portraits of about 25 of his countrymen. These were people who did not fit in the communist system, although they had been born into it and had to function in it. According to Parfianok, the degree to which they literally exposed themselves corresponded to the degree to which they did that figuratively. Most of the photographs were made in the homes of their subjects, without adding any items to the backgrounds. A number of the subjects decided for themselves how they were to be portrayed. Parfianok used an analogue camera and coloured and scratched the photographs by hand. Each result is as unique as the person it records. 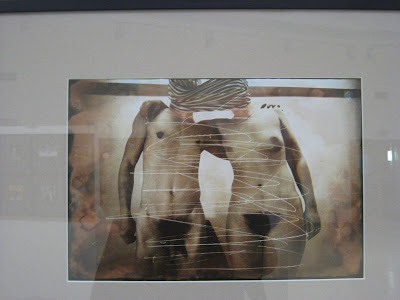 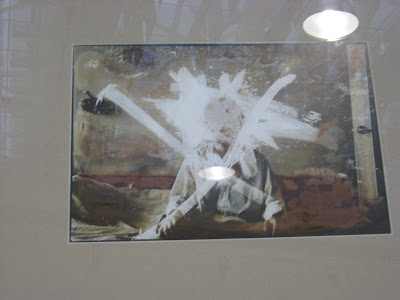 Posted by Evan Mirapaul at 6:38 PM