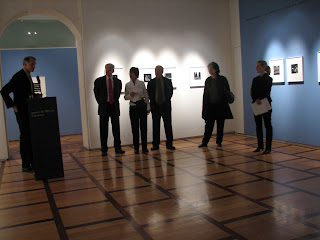 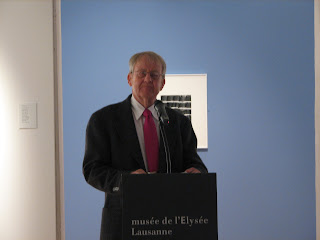 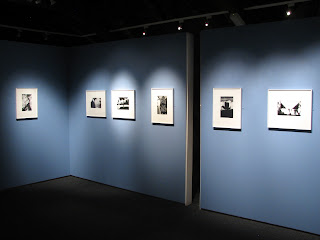 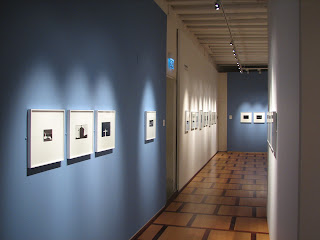 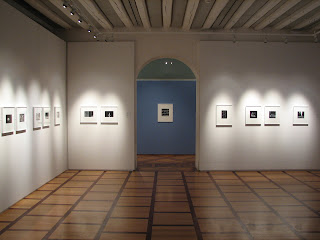 Sometimes I just get lucky.

I won't claim luck in discovering the pleasures of the photography of Ray K. Metzker. I found it on my own and I've worked to learn more about and become familiar with his opus. It isn't really luck that I'm here in Lausanne for the opening of his new retrospective at the Musée d'Elysee. I mean, it was planned to coincide with the opening of Paris Photo, so I knew I'd be in the neighborhood, so to speak. It certainly isn't luck that Bill Ewing put together a great show. He's a top-notch curator who's deeply knowledgeable about Mr. Metzker's work, and the work is spectacular. It would be strange if that combination produced a bad show.

What was lucky was my experience of it. By New York standards, it was not crowded at all. I was able to really view the show, top to bottom. It's laid out on three floors in roughly chronological order: 1956-2007. I was lucky to hear Mr. Metzker's emotional and humble remarks of thanks to the curators and to his gallerist(of 25 years) Larry Miller. Larry Miller gave a heartfelt tribute to his friend and gallery artist. He said that one of the pleasures of Metzker's work is that, no matter how many times you look at it (and he's been looking at it intimately for over a quarter century), new connections, questions, and pleasures can be found every time you look. That idea led to where I started to get really lucky.

As I began to tour the show, Larry joined me and added his deeply informed views on this picture and that. He always has a perspective on the work that comes from a place that I wouldn't have found on my own. Later, I ran into Ann Tucker, curator of the Houston Museum of Fine Art who had mounted her own exhibit of Metzker 20 years ago. Eventually, Larry, Ann, and I spent almost an hour in the last third of show discussing Mr. Metzker, his peers and photography in general. If there is a better way to see a show of work you love, I've not found it; looking at and talking about the work with two people who love it as much as me and know much, much more than me. It was an impromptu graduate seminar in Metzker with me as the sole student. Lucky!

Wall text at the museum informs us that Mr Metzker sometimes views his photography through a metaphor of music. He has themes, variations, tones, and rhythms. Seeing his work in a retrospective context, I couldn't agree more. While the various series of his career show tremendous variety, creativity and breadth, there is a thread that runs through. Just as it is fascinating to view the work year by year and decade by decade, it would be equally illustrative to see the work mounted as a set of themes and variations.

It's a treat to link work from disparate periods who are clearly soul brothers separated by decades. We see Mr Metzker's radical use of large spaces of pure white. Sometimes these spaces bleed out to the edge of the frame and into the white of the photo paper. It seems like some content has been ripped out of the photograph, literally torn like a constructivist collage. Yet on examination, the print is a straight photograph constructed purely in Metzker's camera and darkroom. We see these white spaces in work from every decade: early city views, City Whispers, Landscapes, and most notably in the prints from New Mexico.

The blacks, too, are remarkable. Sometimes there are fields of black so inky deep and dark, one can only get lost in them. Other times, further examination reveals the subtlest shadows in what at first seemed to be just blackness. That Mr Metzker's tonal range goes from white the color of undeveloped photo paper to a black that seems to absorb color shows what a virtuosic printer this artist is.

How Mr. Metzker organizes space is manifested in a multitude of materials that crop up decade after decade. We see chain link fences, stairs, bricks, and the geometry of dozens of city views rendered again and again into an abstract cohesion in his viewfinder. It seemed that one could organize a show just of his use of chain link fencing. Examples from every series except the landscapes come to mind. I posited to Ann Tucker that a difference between Harry Callahan and Metzker is that Callahan is almost always more in close and tight; the figure is more personal, while Metzker takes the more distant, objective view. She replied that she thought that Callahan was about the figure represented in a cityscape, while Metzker was more about a cityscape with a figure or figures included in this view. A subtle but important distinction, I think, especially since even now people conflate the student with the teacher.

Continuing the musical metaphor, I am reminded of a quote by the french conductor and composer, Pierre Boulez. He said after twenty years, he was finally beginning to be spontaneous. This is not a comment on stiffness and lack of inspiration, it's a paean to the creativity that comes from discipline. If you work and work and work, you become so entwined with the material that real improvisation is possible. It's fashionable to just "let it all go", or "just go up and jam", but this approach rarely yields true creative fruit. The best jazz artists, indeed artists in general in my view, find spontaneity from a rigorous work ethic and a strict intellectual foundation. I see this in every Metzker photograph. He is a WORKING photographer. That he can riff on his blacks, or his whites, or fences, or cityscapes comes from the foundation of a language rooted in visual philosophy. By taking pictures and working in the darkroom non-stop he anneals this language into a body of work that speaks in every picture of inspiration and freedom.

A famous french actor once said that to be a great performer one must have a cool head and a hot heart. Mr. Metzker's photos reveal him to be a performer at the highest levels of his art.

If you're lucky, you'll see this show. In any case, explore this artist's work. It is its own reward.