So, I have been really thinking alot lately about this whole Creative Destruction thing. The last time I posted, this was the list:

Since then, Ron Rocco has suggested Jon Kessler, and I suggested Kenneth Josephson's postcard collages. I haven't been able to find out enough about Kessler to decide whether to include him, but I'm starting to reject some of my own ideas. It seems core to me that there should be a real element of destruction to be included in the idea. I think this leaves out most if not all collages, so Mr. Rauschenberg and Mr. Josephson don't quite fit the bill, and I'm inclined to excude Matta-Clark, as well. Though he has destruction as a core idea of his practice, there doesn't seem to be any actual destruction happening to the print itself. The photos only document destruction. This is not what I'm going after.

But then, what if the artist is engaging in destruction of the print, but does not have destruction as a core element of his practice. I had an engaging discussion with a friend on this topic concerning the work of Walead Beshty. I argued that he's a lock for the list since he purposefully submits the print through all sorts of challenges that are specifically intended to mark them, mar them, and show the effects of their mistreatment. My friend argued that this was all a biproduct of a different artistic argument, and that therefore, the destruction was incidental. Hmmmm.....I think submitting film to travel, x-rays, and un-professional handling for the reason of documenting how the work will bear the scars of its travel qualifies him for the list. Plus, I love the art, so I wanted an excuse to talk about it.

Also new on my list are the folded, color abstractions of Wolfgang Tillmans. 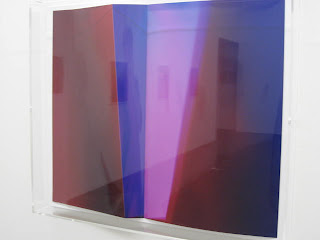 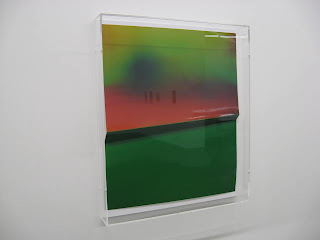 I think they speak for themselves, though, as in the case of Josephson, it's hard to argue that something so clean and precise is destructive. I guess my argument is that, by folding, he is "ruining" the paper in a onetime creative/destructive act. Also, I am wondering about how the use/misuse of darkroom technique adds to the discussion. Is playing around with chemicals like Beshty, Tillmans, and Rossiter (see below) do really destroying anything or showing a creative destructive act? For now, I do include Tillmans. Adding up all of the various processes puts him on my list.

What about Miroslav Tichy? He often tears his sheets of paper and uses chemistry that is compromised. the results "look" damaged. But is his practice destructive? I have been told that he tore his paper to economize when he had little access to materials. Same deal on the chemistry. If he had access to pristine materials, would his art look different of would he still have chosen the look that he has. I'm on the fence here. I don't convince myself that he's truly in the category.

Another outsider artist that I think DOES fit is the Hungarian, Andras Baranyay. He disfigures his self-portraits with pen, and crayon, and felt-tip marker. Great and compelling work if you ever get a chance to see it. It's virtually unseen outside of Hungary.

Joachim Schmid is firmly on the list. His postcard collages firmly destroy an image and re-create it in a way that is not just collage. Also, his intent is to destroy the original.

Allison Rossiter is an interesting artist I found at the recent AIPAD. She uses expired film and paper stock and prints the damaged source material as photograms. The evidence of mold, expired chemistry, and handling creases all speak to a wonderfully subtle creative destruction. I like the work a lot. You can find it at Stephen Bulger Gallery in Toronto. She lives and works in NYC.