One of the reasons for me to come to Berlin again at this time of year was to see the current installment of the Berlin Biennial. I had seen it for the first time 2 years ago, and found it to be a remarkable experience. There was such a quantity of unforgettable art placed in unforgettable spaces that I couldn't resist the chance to see the next iteration. Boy, did I get it wrong.

This has to be one of the most disappointing and completely forgettable art experiences I have had. The art on view was consistently un-engaging, unappealing, and un-......well, add your own negative adjective. They all fit. Rather than rant on how boring the high-falutin', off message art-speak was in the catalogue, or blather about how easy it was to walk past installations because they looked like recycling piles, I will rather focus on one artist whose work has stayed with me in a positive way - David Maljkovic.

The work was a collage of vintage images from Soviet era trade shows in the former Italian Pavilion of the Zagreb World Fair grounds that experienced its heyday in the 1960s and 1970s. He collaged contemporary pieces of photography onto the idealized communist architecture showing us how it was now abandoned and in disuse. Another example of simple technique serving to communicate powerful ideas with immediacy and grace.

Speaking of the last Berlin Biennial, one of the most talked about pieces back then was a one-to-one proportion re-creation of a Nazi boxcar prisoner transport made by Polish artist Robert Kusmirowski. Kusmirowski is interested in making models of things or events that allow us to travel in time by experiencing the object as we might have experienced it when it was new. At Zak-Branicka gallery (http://www.zak-branicka.org/ ) he has a new series of photographs that show him as the subject of experiments in a 60s era computer lab. The lab is fictitious, but it has the verisimilitude of an actual scientific environment. In this series, he engages a number of important photographic traditions - model making, false narrative, self-portrait - in a way that is completely personal, not at all pedantic, and highly communicative. Check it out.

It seems that there is a lot of really good work coming out of Poland these days and Zak-Branicka seems to get their hands on a lot of it. Readers of this blog will have heard me mention many of these names. Monica Sosnowska was my favorite at the Polish Pavilion at the Venice Biennial and was a hit for me at the Boros Collection as well(see below). Same for Kusmirowski who had a bicycle sculpture at the Boros. Szymon Koblyarz makes post-apocalyptic architectural models among many, many other art practices. Go to the Zak website and look at some of the work. It's one of the most exciting rosters around. Here is just a sample of my faves:

So, on to the Hoffmann Collection.
(Hoffmann Collection website with pics of past installations and how to reserve a visit)
This was my third trip to this collection. It never fails to impress and to educate. Erika Hoffmann has a remarkable eye that always finds the juxtapositions among her art works that show some new perspective. She also seems to have an eye for very talented young artists to use as docents on the Collection tour. The last time I was there, I had the pleasure of being guided by noted video artist Peter Welz. (http://www.peterwelz.com/) This time, it was Ariane Pauls. She seemed like a smart, interesting, thoughtful young woman, so I can't say I was surprised when her website showed her to be a first rate artist with a good CV. But I was surprised at how, once again, Hoffmann Collection had an artist of this caliber leading tours. Maybe it's worth going to the Collection just to see who Erika Hoffmann is employing these days.....(http://www.arianepauls.com/)

Ariane figured again in our visit to the Boros Collection. (http://www.sammlung-boros.de)
We had been told that, though the Boros was officially open, there would be no public tours until after we were back in the states. Ariane said, no, there would be tours that weekend. Just show up and say we're from the US and we'd be let in. We did as instructed only to be told that the collection was not yet open. But wait! Just as we're ready to pack it in, Ariane shows up on her bicycle, explains that we're important collectors from the US, guests of Hoffmann Collection, and poof, we're in. Yay Ariane!!

My favorite work in the bunker was the Sosnowska sculpture/intervention. If it looks crowded in my pictures it's because it was. This piece takes over the space like a retrovirus. It goes through walls, goes into other rooms, and tails out to the edges of the spaces. You can also go into the piece walking through a dark maze of polished wood. My inexpert photos here: 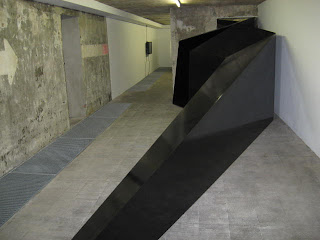 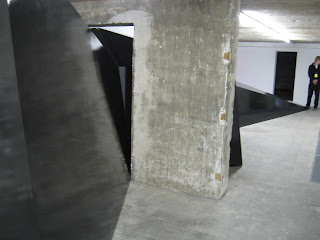 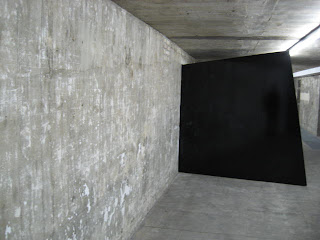 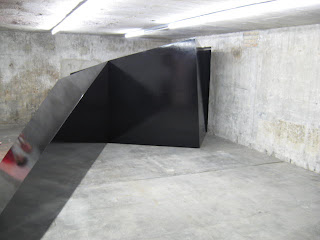 And the entrance to the interior of the piece: 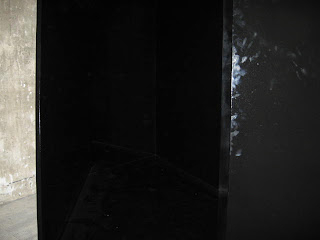 2 views of the outside of the bunker. More in the links above: 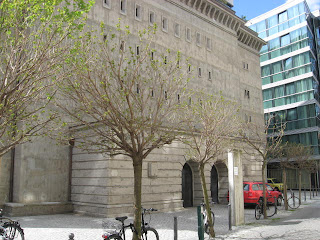 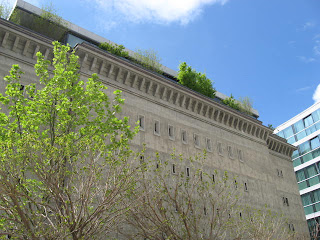 You can just barely see the 3000 sq. ft. apartment he built on top.


And finally there were two shows on Brunnenstrasse that I thought were great. I blogged on the booth of Nice and Fit from Preview fair in Berlin last year. She had a super show showcasing photogram and process including two favorite artists of mine, Walead Beshty (see Even More Creative Destruction), and Liz Deschenes. (http://www.niceandfitgallery.com/)

I thought the press release for the show was on point, so I reprint it here in bold:

The title of the exhibition which focuses on contemporary artists experimenting with photograms, comes directly from Man Ray’s 3 minute film Le Retour á la Raison (1923) in which he applied and extended the principles of the photogram to a moving image, particularly in the first sequences. Markus Amm, Walead Beshty, Liz Deschenes and Nathan Hylden are some among several artists working today in photography who have been engaged with this early twentieth century technique. The return to the photogram partly refers to some of the constants here –the absence of the camera, the element of action, the self-reflexive aspect and chance-but what is distilled on the photographic paper produces vastly different visual and conceptual fields.

Walead Beshty’s large scale hand processed photogram from a series he produced in 2006 relies on the effect of light and chemicals on silver gelatin paper. The textured surface of the work is both a consequence of the crumpled paper used as the means to cover, expose and register as well as the subsequent crumpling of the print. The emphasis on materiality notwithstanding, Beshty’s picture is also performative demonstrating an indivisible mobility, to borrow the words used by Henri Bergson to define his theory of Duration. Time, mobility, chance and self-referentiality are further explored in Fedex First Overnight Box, New York-Berlin in which the artist made and packed a glass box the exact dimensions of a large Fed Ex box and shipped it from his gallery in New York to the gallery in Berlin.

Photograms are presented in series that act as formal exercises in the case of Markus Amm. Representing just one aspect of his work-being engaged in various media including sculpture and painting-Amm’s minimal monotypic script takes issue with the possibilities of abstraction in photography. The exclusion of the apparatus forces photography to abscond with a few painting attributes. However, whatever the semblance might be (physicality, uniqueness) they operate within a different space which is both strict and accidental.

Nathan Hylden’s photograms are less about materiality and chance- like his sculptures and paintings they negotiate flatness, positive and negative space. The patterns that are prefigured and geometric slightly evoke mid Neolithic Greek pottery decorations –they also come across as proto-copying machine print-outs.

Of all the artists in Le Retour, Liz Deschenes is the one whose artistic practice, as she says, “has been completely immersed in the photographic medium”. The Photographs which she is showing here, “are silver toned black and white photographs with no imagery or content. They look and function similarly to mirrors. Daguerreotypes, one of the initial photographic processes, are often referred to as mirrors with a memory. These photographs share the uniqueness of daguerreotypes, the silver reflectivity, and the mercurial viewing experience. The viewer activates the work, and becomes an integral part of a temporal, unrecorded representation”.

The other engaging show was at the project space, Artnews Projects. There was some truly subversive work here. The most terrifying was an actually illegal piece that showed how to make a dirty nuclear device that could be left in a purse in a public space. The purse on the floor next to the display case was enough to make you need a change of underwear. It was a group show chock-full of fine video and installation work. The link to the press release and pictures of the show are here:
The New World exhibit press release and artists list

Berlin never disappoints me in fun, artistic diversity, and wonderful people. If you've been thinking of going, don't put it off. Berlin is at a near perfect moment now between the new and the old. As I always say....check it out.
Posted by Evan Mirapaul at 9:37 PM