In October of 2007, while on an ICP trip to Japan, talk turned to other interesting travel destinations. I mentioned that I like to go to Berlin. One of my friends on the trip suggested that we go together and let me show him the city. Thus was born a wonderful idea for a trip. Later, another friend expressed interest in going, so ultimately it was him and me plus the original friend and his girlfriend. We decided to plan the trip around something called "Collectors Weekend" that happens in Berlin every May. Dozens of galleries have special openings and parties. It's kind of a fair except that instead of booths in a fairground, each gallery gets to use their whole space as a special exhibit. We mentioned the idea to Joe Amrhein and Leif Magne Tangen from Pierogi Gallery. They told us that Leipzig has a parallel event that happens just before the Berlin weekend. It is centered around the former industrial site called Spinnerei that now houses dozens of galleries and artist studios. Remembering what a remarkable time we had at the Pierogi event at their rented warehouse during Miami/Basel, we knew this was when we had to go.

I'll leave the Berlin portion for last and start with Leipzig. I had been to Leipzig 15 and 20 years ago. 2o years ago it was still east germany. 15 years ago, it had just strated the post unification boom that is still going on today. Though it remains a gray former industrial city as evidenced with my "homage to Ruff", 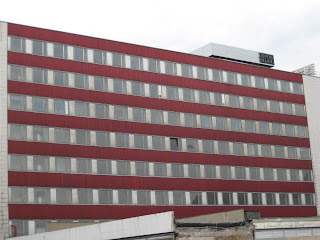 it is a vibrant and art-filled place. It also has some quirky pleasures such as a absinthe bar with a truck out front that served as a mobile bar. The hood ornament on the truck was an elephant. I've never seen anything like it. 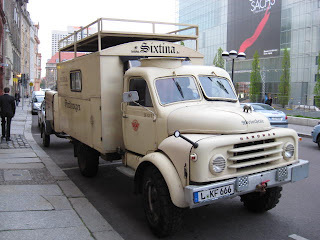 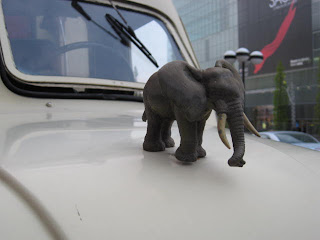 Spinnerei is a former cotton spinning plant. It is a huge, sprawling complex of buildings that house galleries, cafés, small businesses, and artist studios. It has somewhat of the feel of MassMoCA but much less polished and corporate. Though some of the galleries there are top-notch and well-known, the whole enterprise manages to keep it's underground feel. 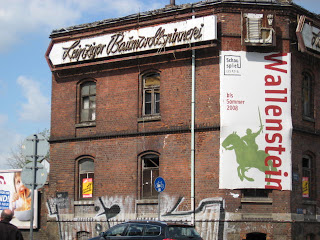 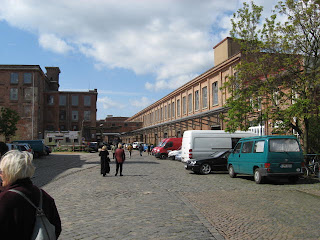 The thing is, it seems like anytime, anyplace I have contact with an art event that has the hand of Pierogi in it, I have a good time. Those guys, Joe Amrhein and Leif Magne Tangen in Leipzig, just seem to know how to keep the vibe right. The art is good, people are serious about the art but relaxed, there's food and drink, the place they choose is funky and cool - I mean, it's just right. Hats off gents. They show a photographer I'm liking very much named Nadja Bournonville. (http://www.nadjabournonville.se/who.html) Leif showed me the work at Armory plus Nadja has her studios at Spinnerei. We got to see much of her current output and get to know her a bit. Check it out.

Dogenhaus Gallery was new to me at Spinnerei. They carry a young Leipziger photographer named Albrecht Tübke. The world has no shortage of portraits taken straight on with a subject looking back at the camera. There are thousands of Sander and Arbus wannabes. Yet, as similar as many of these portraits can be, the good ones do separate from the pack. I first saw Tübke's work in a book. I was impressed but I was concerned that the images wouldn't hold up in person. I sought out Dogenhaus specifically to see these portraits. Gallery owner Jochen Hempel could not have been nicer or more helpful. And the good news is that the work was very successful in person. I confess I've been slow to come to work like this; simple, frontal portraits. Suddenly, I can't get enough. Hiroh Kikai, Tübke, Annalees Louwen, Hendrik Kerstens......If you go to Basel next week, look for Tübke at the Dogenhaus booth at Volta. It's good stuff. (http://dogenhaus.net/)

Hamburger Bahnhof had not one, but two of their massive shows. One was a retrospective of the conceptual, photographic couple Bernhard and Anna Blume. They are the teachers of an artist I like very much and have written about here, Thorsten Brinkmann. I mentioned them briefly in an earlier post after seeing a large installation in the Kicken booth at Art Forum Berlin. I just don't know what to make of this work. It seems witty, and it has none o the dead-on objective seriousness of the Bechers. But I'm sure the Blumes would argue that their work is every bit as formally and conceptually grounded as their better-known countrymen's work. The problem is, I haven't found it yet. I find their work remarkable for the scale they chose in a time when scale was not this heroic. I find the theatricality of their work engaging and thought provoking. But what else? I bought the catalogs and I promised myself I would do some reading. I'll report back. I guess if we accept one definition of art as something which compels us to ask questions or which questions us, then this work has succeeded in that. I am asking myself many questions and I'm curious to continue to explore the work. here are a few examples. 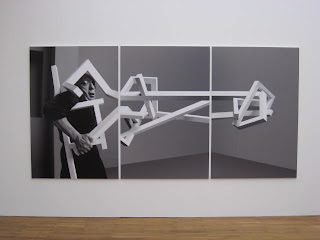 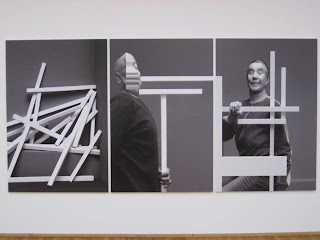 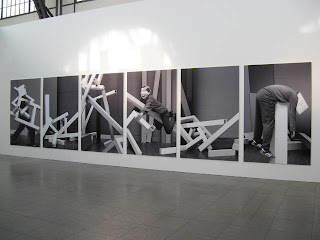 The other huge installation was an overview of part of the Christian Flick collection of photography. This was an embarrassment of riches. There was room after room of Bechers, room after room of Höfer, similar quantities of Struth, Ruff, Stan Douglas, and Rodney Graham, a few Gurskys for flavor and a great David Claerbout installation. Oh my god, it was overwhelming. That being said, it was not all what one would expect. The Ruffs and Höfers were very early series and the Stan Douglas was all small scale color work documenting urban decay around Detroit. The early Höfer showed a heavy debt to Louise Lawler without much of Lawler's cleverness and unpredictability. the early Ruff series was of motel interiors that I have always found to be inscrutable. The Stan Douglas series really popped out at me. Visually and philosophically this was compelling in every way. I was happy to see every one of them. Even though there were dozens and dozens it didn't seem like too much. Höfer and Ruff could have been halved to the same effect if you ask me.

Chapeau to Hamburger Bahnhof for being able to mount such ambitious shows. Sink or swim, it's wonderful to be able to see art on this scale and artist's work in such depth. As I have mentioned in the past, certain work just seems to have a "right" place to be seen. I spoke of the Turrell on Naoshima and Sandback and Serra at Dia/Beacon. Well, the Anselm Kiefers in the main hall here as part of their permanent collection are stunning and monumental. I cannot think of a better advocacy for this work than how it is seen here. Wow. I try to see it every time I go to Berlin. 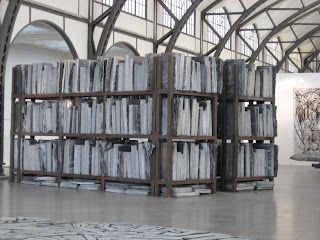 Last in this chapter, I was pleased to see the work of Jörn Vahöfen at Kuckei & Kuckei. I had seen this image on the same day I first saw Thorsten Brinkmann's work at Kunstsalon art fair. I took a picture of my favorite image, 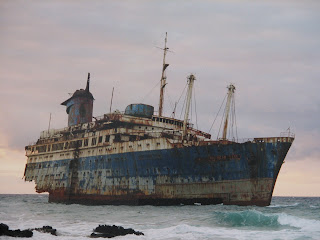 never imagining that I would see this same image in a prestigious gallery a few short years later. He has a small book out called "Disaster" that has a number of very fine images. Kuckei & Kuckei has an interesting program that also includes Barbara Probst. Well worth looking into. http://www.kuckei-kuckei.de/

Posted by Evan Mirapaul at 9:37 PM