I had what in retrospect was a fanciful notion. I thought I could do a sideline trip to Bilbao on my way to the ARCO fair in Madrid. I made a couple of bad calls on the planning end. First, to save money on an upgraded ticket, I consented to go to Lisbon instead of Madrid. How hard could it be to get to Bilbao from Lisbon, I asked myself? Well, the answer is: impossible. (How many of these little travel disasters do I have to do before I learn that you HAVE to fly direct.) I had booked a flight from Lisbon to Madrid, then a round trip from Madrid to Bilbao. I built in a few hours between each flight figuring something would hold me up. What I didn´t count on was the snow and ice storm coming into the northeast corrider the day of my departure. To make a very long, dull story short, my plane sat on the tarmac for 6 hours before taking off. We were on the ground almost as long as we were in the air! I arrived in Lisbon slightly late to catch my Madrid-Bilbao flight. The challenge now would be to get to Madrid at all. Next flight available in my fare class: 8:35pm.

Hmmmm......6 hours to kill in Lisbon. Only one answer came to mind; go to the Gulbenkian Museums and see what was up. It was the day´s salvation. The Gulbenkian proper had it´s well-known classics. I was bouyed by some first-rate Turners and Gainsboroughs then completely seduced by the Lalique room. In particular, a deco mirror in bronze that had the glass supported by two intertwined snakes. Brilliant. 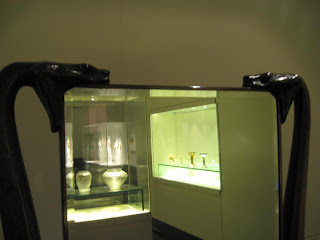 I was also drawn to a painting of "Painter Brown and his family" by Giovanni Boldini. The work was proto-photo realistic and had a feel of a Weegee or Winogrand photo. For a painting, it had a remarkable sense of a moment stolen on the fly; a great sense of motion and spontaneity. I was particularly struck by the use of negative space to the left. It gave the painting such urgency and speed. The figures just can't wait to get to the other side of the frame. A treat. 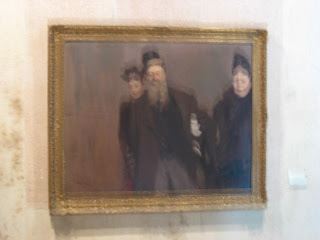 Then I dropped in on the contemporary museum that shares the grounds with the Gulbenkian. There was a video art survey on that included some intriguing work by David Claerbout, Rodney Graham, and a stunner from Laurent Grasso. The video showed a retreating camera view of an approaching, roiling dust cloud. Whether it was from a natural disaster, a bomb, or a nightmare was not clear. But the ominous, looming presence was a real imagination grabber. 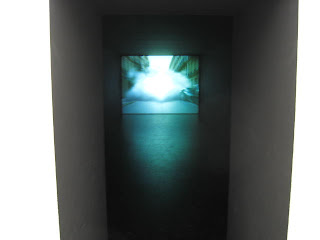 Melik Ohanian´s pictureless video was literally and figuratively dark. The screen was blank except for white highlighted text that limned the voices you could hear on the audio track. The sequence and lack of context made the text into a new narrative. Some of the voices were familiar but, in this presentation, all but a few of them were anonymous, vernacular sounds. I wish I could have stayed for more. This was the view of the video installation. Sorry it's the wrong way around, but you get the idea. It's my homage to Casebere: 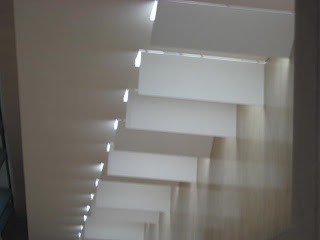 Elsewhere in the Contemporary Museum was a mirror sculpture by Jose Pedro Croft. A good, eye-bending piece. I love the geometric grid framing the bent, canted space created by the mirror. 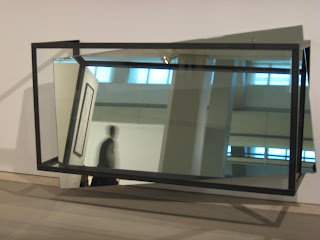 Also catching my eye was a series of photos by Helena Almeida. She started with a drawn line, that she transforms into a thread, which becomes a literal thread which punctures the photo literally piercing the 2 dimensional plane. I seem to have a thing for this kind of work lately, and I think this was a particularly strong example of the oeuvre. 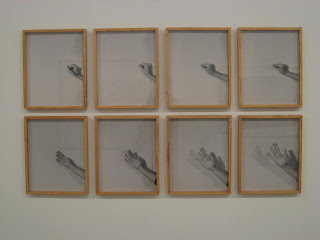