A very belated and untimely addition to my first ARCO/Madrid post. There was much, much more on the trip than just going to the fair. I was traveling with a group from the International Center of Photography (ICP). In addition to the program that ARCO made available to us, ICP had some wonderful "backstage" visits to add to the trip.

It seems that private funding for art foundations by Spanish banks is alive and well. We started at Fundacion Astroc which had a display of works by Gabriele Basilico. Astroc awards a prize every year for architecturally related photography. Basilico was this year's winner. I can't say that I am an ardent fan of this photographer's work. While the images of Beirut are haunting and unforgettable, most of his cityscapes are under-realized. When I see most of his work, I can't help but think that I have seen similar ideas executed more convincingly by other photographers. Yaiji Matsue, Naoya Hatakeyama, and Robert Polidori are just a few that come to mind. Still, the Astroc Foundation is doing a fine thing by the supporting the arts in this way. They are housed in a truly magnificent villa in the center of Madrid. Any exhibition they mount would be worthwhile to go to just to see the space. http://fundacionastroc.org/

Another major funder of the arts, Caixa Forum, had the opening of its new, Heurog & de Meuron space near the Reina Sofia museum. 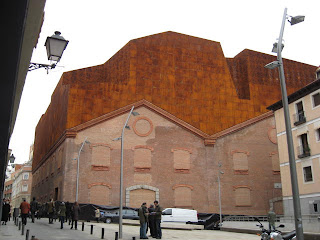 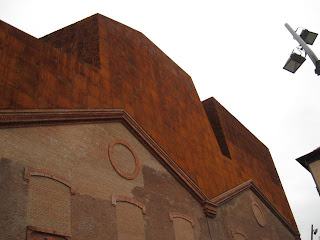 It is a dramatic and effective space, though, like many new celebrity architect museum spaces, the building is more of a star than the art inside. On view was a laundry list of well-known a-list art fair art, but mostly less-than-a-list examples. The best for me was a spectacular series of the the absolute best of UK artist, Gillian Wearing. The most effective of her series in which she transforms herself into various family members were all here. A treat to see them together. I hadn't gotten to see them together like this since I saw them in Arles 3 years ago. They are brilliant. (Caixa Forum Madrid)

ICP arranged behind the scenes viewings at the Reina Sofia, the Prado, and the Biblioteca Nacional. All of these visits were rare treats to see a side of a great institution that one doesn't usually get to see.

At Reina Sofia, we were greeted by chief photo curator, Catherine Coleman. She gave us a tour of the photo department that included a perusal of the portfolios of about 8 lesser known Spanish photographers. After that, we were led on a whirlwind walk-through the highlight of which was a private view of Picasso's Guernica. In addition to Guernica were two Coleman-created photo exhibits in support of the famous painting. The first was a photo essay by Dora Maar which traced the evolution of the paining as it was created. The second was an overview of newspaper photos and stories of the actual event that was the bombing of the small Spanish town of Guernica. Both shows were revelatory and significantly added to my understanding of the magnificent painting.

The Prado has just undergone a huge expansion and face lift. ICP arranged for us to have a tour of the building led by one of the principals from the architectural firm that designed the expansion. My favorite part of the tour was the the viewing of the conservation labs. Canvases in every stage of restoration were there to be seen on easals, lying flat, or unrolled for their frames. The tools of the conserver were everywhere: paint, solvents, bits of canvas, etc. It was remarkable to see the work in such a fragile, open state.

Isabel Ortega was our scholarly and helpful guide at the Biblioteca Nacional. She brought out a few rare volumes of paper negative prints by the Spanish photographer Juan Laurent. For those of you unfamiliar with this great 19th century artist's work, the Luminous Lint website describes him:

He opened a Daguerreotype studio in Paris under the name "Laurent & Company" in 1843. He moved to Spain and established a studio in Madrid in around 1857 and became one of the great photographers of nineteenth century Spain and Portugal. He took a vast variety of subjects including city views, architecture, historic monuments, old master paintings and local inhabitants of all social classes. His output was prolific and over 11,000 negatives have been attributed to the J. Laurent studio.

I can't tell you what a treat it was to see dozens and dozens of these masterpieces up close and out of frames. It was a highlight of the trip and not soon to be forgotten.

Gallery hopping was also on the agenda of this trip. Three favorites come to mind. First up was Galeria Elba Benitez who had an exhibition of Brazilian artist Ernesto Neto. In addition to the expected soft material/spice work was new sculptural work in cor-ten steel. Mr. Neto makes screen-like planes with numerous cutouts, 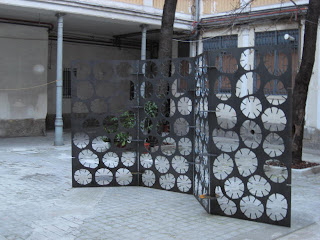 then uses the cut-outs themselves to build alternate, "negative" sculptures. 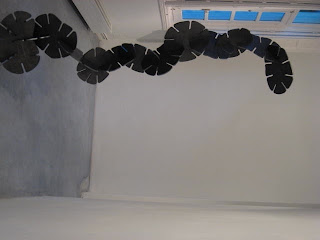 (again, sorry for the sidways pictures. I'm having trouble loading some pictures properly these days. I hope to get technical help to fix the problem soon.)
The Elba Benitez program is a truly remarkable one. Those of you not familiar with the gallery are encouraged to take a look. Though many of the names will be familiar, some others, like Ignasi Aballí, are well worth exploring. (http://www.elbabenitez.com/)

At Max Estrella we were introduced to Spanish artist Daniel Canogar. Mr. Canogar is an ICP graduate from the early '90's who works in the intersection of photography, video, and technology. It was an intriguing and fascinating exhibition from an artist that should have more play in the US. (Max Estrella Gallery)

Finally, we paid a visit to Galería Fucares. In addition to seeing works by my friend Isidro Blasco, we were introduced to the subtly conceptual work of Bleda y Rosa. The pieces we saw were photographs of ancient battle sites from Spanish history. The artists look for some tiny hints that this was a place where important battle had taken place that are now covered by centuries of growth and the encroachment of the modern world. I was not immediately won over, but found the work to be still on my mind days later. Always a good sign. Check it out. (Fucares)

All in all, a great trip, and a place to which I would be happy to return. The advance press on ARCO was accurate and positive, and the gallery scene is vibrant. There's a lot to see. Thanks to ICP for the value-added special events that were icing on an already delicious cake.
Posted by Evan Mirapaul at 11:45 AM