"Next Level" magazine and Thorsten Brinkmann

I am thrilled to report that my first published photo essay will be coming out next month in the UK magazine, Next Level. If you haven't seen this magazine, look for it. It is a beautifully produced and intelligently presented photo publication. The emphasis is on the photography with short, supplemental essays giving a little background and context. The list of artists they've spotted and supported early is an impressive one. Editor Sheyi Antony Bankale clearly has an eye and his fingers firmly on the pulse of the photo/art world.

My essay will be on the German artist, Thorsten Brinkmann, who has been mentioned in these pages before. I wrote an alternate essay for the magazine which I will reproduce here since they could only choose one. I will say as a caveat that Thorsten was not so thrilled with this essay, though I still think that it puts him in an interesting historical perspective and and rightly places him next to some greats of the art world. Those of you who read both the Next Level piece and this one, I would be eager to hear what you think of both.


Wit is the rarest of rare birds in photography. Elliot Erwitt displays it. Garry Winogrand is a master of it. Humor, too, is rare. I would differentiate them in a photo context by saying that humor is going for a laugh while wit represents some kind of ironic visual play. Winogrand is never humorous though often darkly witty. Erwitt is sometimes both. Both of these photographers are significantly different in style, but they share the fact that they find their scenarios in the real world; there are no studio or set shots. So rarer still is photographic wit in the studio. Phillippe Halsman comes to mind in Dali Atomicus or Nixon jumping. Who else? The field is tiny. For any photographer wanting to explore this world, the path is filled with peril. What artist wants his work looked at as cute or incidental? Jokes don’t translate well. Will a viewer in Japan find the work as witty as a viewer in Germany? And perhaps worst of all, what if the attempt at wit is understood but no one likes the joke. There’s no thud louder than the sound of a bad joke hitting the floor.

Enter Thorsten Brinkmann. Here is the confident hand of someone who knows the joke, knows just how to tell it, and, best of all, knows that there is something more to the story than just an easy laugh. Added to the mix is the fact that all the jokes are at his expense since every photo is a self-portrait. Thorsten Brinkmann creates environments. He goes out to the junkyards, flea markets, and dumpsters of the world to find the materials for his art. With those materials he builds walls, floors, objets, and furniture; the full contents of a scavenger’s apartment. Of course every apartment needs something on the walls, so he hangs pictures of himself covered with more of the junk trouvé. Of course, the backdrops for the photos are created environments as well. A mirror in a mirror in a.....

We see the wit first. In Rain Mc Keul or hopi green holding kni he preens in a mock-heroic pose that harkens back to classical portraits of the 19th century like Velazquez and Courbet. 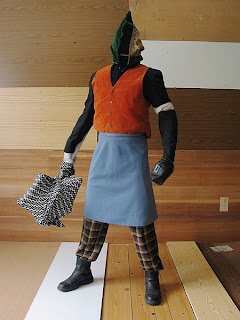 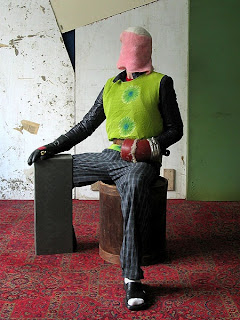 In Bigi Di Innozencia and Henri Van Ed we see poses that would not be out of place in the Uffizzi. 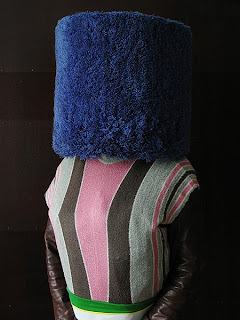 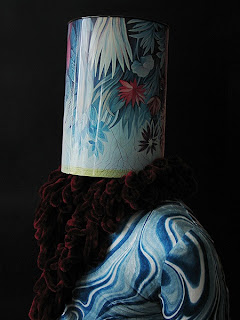 Brinkmann’s photos poke fun at himself and at these traditions. Yet the joke comes right back at us since he is upholstered behind what we have thrown away. The garish colors, cheap patterns, and texture of “real” vinyl contradict the luxe and private world that portraits like this usually reveal. Far from the castles and mansions that are haunted by portraits posed just like this, Brinkmann shows us ourselves as well. His wit is on display when he obscures himself behind the cast-off material of a consumer society. But behind the wit lies a dead on comment about dignity and individualism. The wit is just the camouflaged skin of a predator poised to go for the kill.
Posted by Evan Mirapaul at 5:54 PM