Armory week, day 3. ADAA, Independent, and a couple of galleries.

I was back out on the pavement early this morning starting with three collection visits in upper Manhattan. I prefer not to gossip about privately held work, so, even though these homes were opened to the public, I will remain silent on thir identities and content. The last collection was on the Upper East Side which made for a convenient bridge to the ADAA show.

In the past, ADAA fair has been a museum-level display of some of the finest examples of 20th century art on the market. The fair had a bit of a musty, private club kind of feel, but there was no doubt that the work was consistently of the first order. I still remember an exquisite, small Rothko I saw at Greenberg van Doren Gallery. I still wish I'd had the million dollars on hand it would have required to take it home with me.

The buzz I'd heard was that ADAA was trying to update their image to include more living artists and to evince a snappier vibe. It did seem a brighter, livelier atmosphere than last year, but perhaps at a price. While there were still fine examples by A-list artists, the sense that one was seeing the best possible examples available was very much absent. But I digress from the photographic. As one would expect, the Princes of the photo gallery world were on hand with some great work in tow. Fraenkel Gallery devoted their booth to Hiroshi Sugimoto making the case yet again why he is an important artist. Howard Greenberg had his usual exemplary examples of mid-century masters. And Hans P. Kraus showed a stunning Taj Mahal diptych by Dr. John Murray showing an albumen print above the 1864 waxed paper negative of the same image. Not cutting edge contemporary work, but a spectacular piece that any photography lover would swoon over.

Across town, things could not have been more different at the Independent Fair. Or....I should say, we were being told by fair organizers that things could not have been more different. As Holland Cotter mentioned in his New York Times review on March 4th, 2010, many of the galleries and much of the art was quite well-known and frequently seen at A-list galleries around town. I am very happy to see works by Roe Etheridge, Eileen Quinlan, and Liz Deschenes any day of the week (they are all personal favorites), but I can and have seen them at Andrew Kreps and Miguel Abreu on a regular basis. I feel misled to find them at a fair billing itself as alternative and edgy. Same deal at McCaffrey Fine Art where I saw more Jiro Takamatsu after his solo show there earlier this year. I love the work, but....

Continuing on a theme, John Stezaker's collages always deserve a look. I've written about them on these pages many times. London gallery "The Approach" had a fine small set. New? A world apart from other fairs? 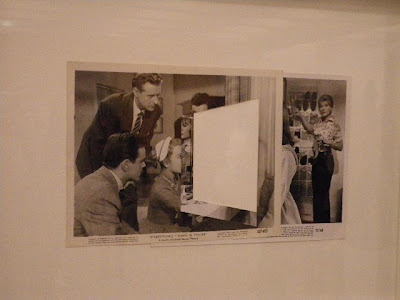 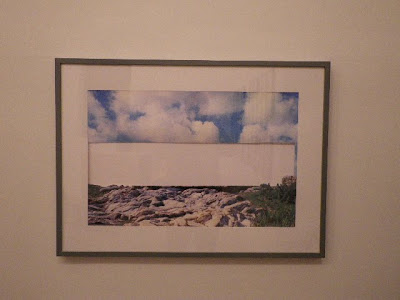 Somewhat less familiar were the works of Roman Ondak at gb Agency. Worth a look and I wish they'd brought more. Sorry, no pic.
One work at the fair which knocked my socks off was not a photo though it's source was a newspaper photograph. A drawing by Andrea Bowers used densely packed pencil marks to define negative space with obsessive force, leaving the the scene limned in the lower right hand corner to stand out with quiet power. 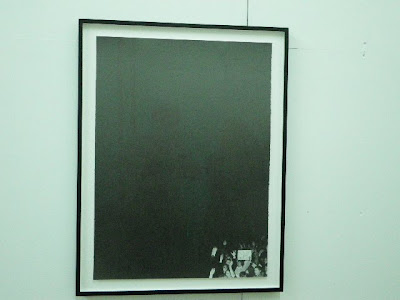 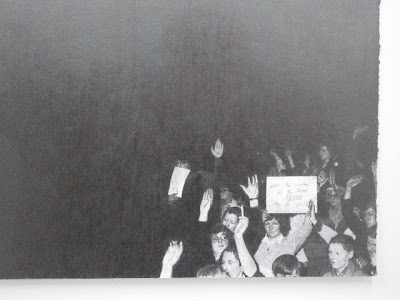 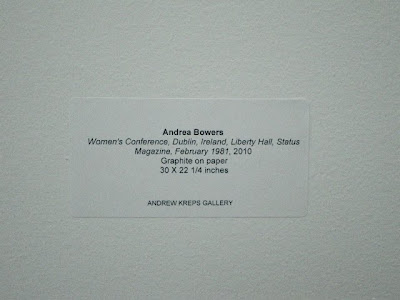 In between ADAA and Independent, I hit a few Upper East Side Galleries. I had been meaning to see the Sam Falls show at Higher Pictures for weeks. It closes tomorrow, so I just caught it. Owner Kim Bourus stole the show last year at AIPAD with her low-priced, highly reviewed show of Jaimie Warren. Expect Sam Falls work to fly off the walls in the same way. This young MFA candidate at ICP is looking strong in a well-selected group by the gimlet-eyed Ms Bourus. In what is very much a personal visual style, Falls is still ironing out a few stray influences. But have no doubts, the work is very good and will make a splash at the upcoming AIPAD fair.
I also stopped upstairs to preview L. Parker Stephenson's Yuichi Hibi Shanghai series. It looks wonderful. This artist, who has had a vibrant publishing career with 4 highly acclaimed books from Nazraeli Press, has had scant exposure in New York Galleries. Ms Stephenson is looking to change that, and the work argues that we should see much, much more of Hibi's work.
Tomorrow: Humble Arts at Affirmation, EFA studios, and whatever fairs I can make it to that I haven't yet seen.
Posted by Evan Mirapaul at 2:57 AM