A much delayed and belated post about my time in Shanghai. Since many of you will have either been to the city or will know someone who has, I think I can limit my reporting about the descriptions and impressions of the city itself. On a personal note, I was pretty frustrated by the time I got to Shanghai. I had wasted so much time with transportation problems, and translation problems, and planning problems, and problem problems that I was ready for some simple, big-city exploration. I was armed with names of people to contact and galleries/museums to visit. Alas, all the folks I was meant to meet were out of town that week, and many of the museums were closed for exhibition turnaround. Sigh. I was surprised what a struggle it was for me, thinking of myself as an experienced traveler, to navigate in a major Chinese city. Frustration.

2 things saved the visit for me. First, there were a number of my colleagues from the Lishui festival doing exactly what I was doing by adding some Shanghai sightseeing at the end of their trip. We shared intelligence, transportation, and many meals. I am in debt to these folks as it helped me get my bearings and made the first part of the trip start to work. Second, I had the good fortune to meet Steven Harris, the owner of M97 Gallery. Steven, who, with his wife, Mercedes, have run this photo-centric gallery for about three years But Steven has been in China for about 10. He speaks fluent Mandarin and knows the city inside and out. The city and its charms really started to show themselves to me as Steven started showing me the town. More on that in a bit.

One of the first stops for the post-Lishui crowd was the Shanghai Urban Planning Exhibition Center. I've always been a sucker for architectural models, so this Shanghai maquette-on-steroids was a huge thrill: 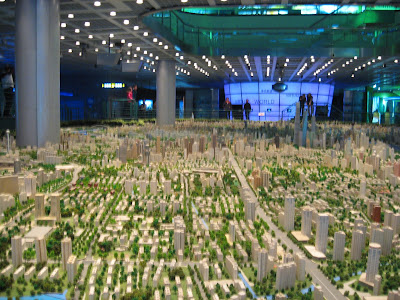 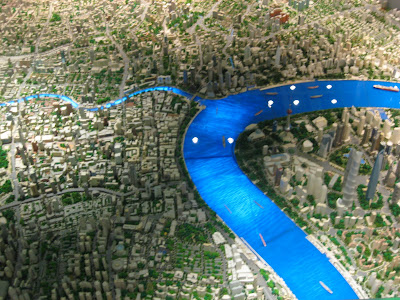 This amazing scale model of the jaw-dropping complexity and density also changed into night views: 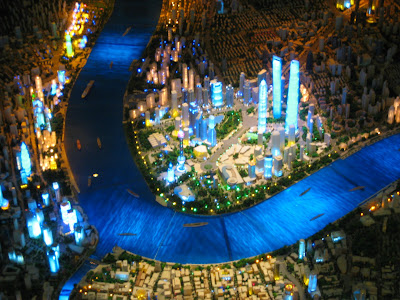 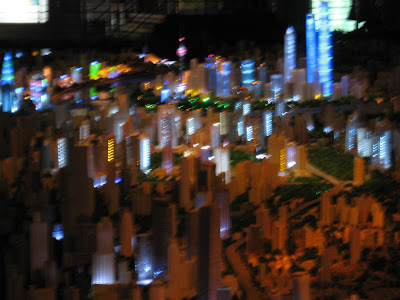 Which could almost pass for an actual night view if you have a cheap enough camera like I did: 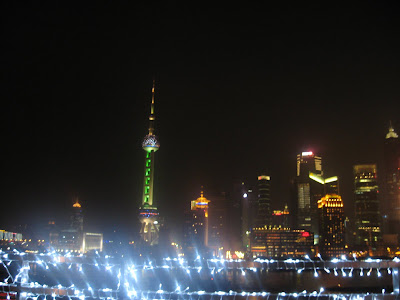 But the real, daytime panoramic views are even more expansive: 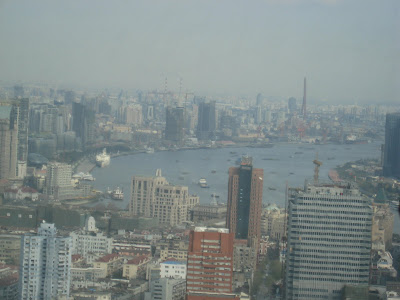 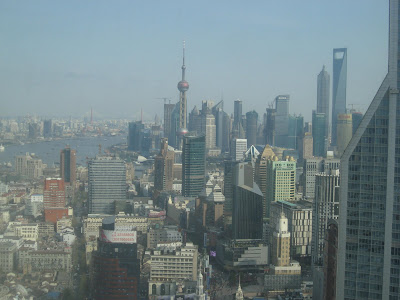 There were other maquettes on a larger scale that demonstrated urban neighborhoods that are being created: 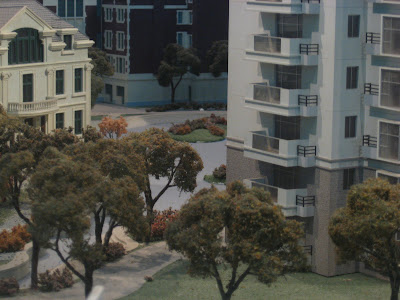 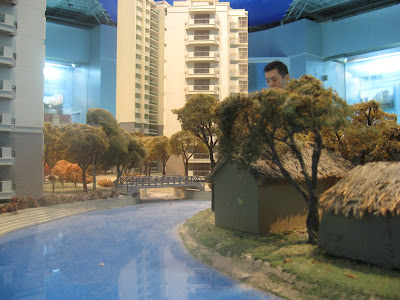 I include this last photo with apologies to my friend, Naoya Hatakeyama, who exploited similar models with infinitely more polish, panache, and content in his "Scales" series: 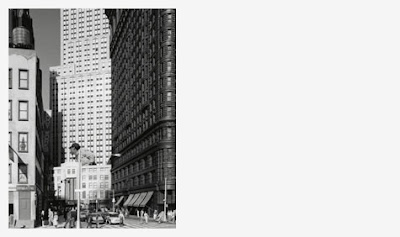 Unfortunately, the Urban Planning Exhibition Center was the exception on my list of must-see museums. Shanghai MoCA and every other museum I wanted to see were all in between exhibits. Ok. So, on to the galleries. First on the list, and the doyenne of Shanghai galleries was ShangArt. I was meant to meet Lorenz, the founder and director, but he was in Miami at the art fairs. The show that was up was not too bad, but I was hoping for more of a look at what was in the flatfiles and the remaining gallery staff barely spoke English. I wandered around the current exhibit which was an exploration of camera obscure by an artist named Shao Yi. Using furniture and paint cans as the dark space to exploit for pinhole exposures, Shao Yi chose to display the works in or on the device that was used to make them:

The screw holes and keyholes in the drawers and cabinet doors are the pinholes for the photography. as clever as this all was, it didn't add up to much. There was little relationship between medium and content, plus the images themselves were uninspiring no matter how clever the application. I felt like I was seeing a studio visit of a work in progress. A work than would require much more tweaking and toiling before it was ready for a gallery show. But here it was already in the gallery in all of its embryonic glory. I would have preferred a more developed concept.

Next on my list in the M50 complex of galleries was OFoto, owned and run by photographer LUO Yongjin. There was an extensive group show up which was a bit of a hodge-podge thematically and stylistically. I suppose it was meant as an overview of gallery artists. I found the lack of focus to be a detriment to all of the artists represented, but it was good, I guess, to see lots of work without having to ask questions. The standout for me was work by Chu-Chu, whose distorted perspective cityscapes are utterly unsuccessful when seen as a jpeg in thumbnail. I'm not even sure you can tell that they're cityscapes so you'll have to take my word for it. Though I was a bit disappointed by the quality of the digital black and white prints, the work remains in my head two months later. Worth exploring further.

My next stop was to Steven's M97 Gallery. Steven is an effusive and voluble host whether he's in his gallery or out on the town. He seemed to have endless patience to explain and introduce each of his artists to us. A few of his artists were already known to me, Michael Wolf for example, but often he had work by them of which I was unfamiliar. In Wolf's case it was his "China Copy Art" project. Mr. Wolf went to Shenzhen's Dafen art village where millions of copies of art are produced each year. His simple presentation was to show the copied work of art with the artist who painted it with a title that stated the copied artist's name and the price in yuan that work would command. "Andy Warhol, 210 yuan" is one. That's about $3 for those not familiar with the exchange rate. I was used to seeing Mr. Wolf's ubiquitous architectural studies, but this work was a surprise and a treat: 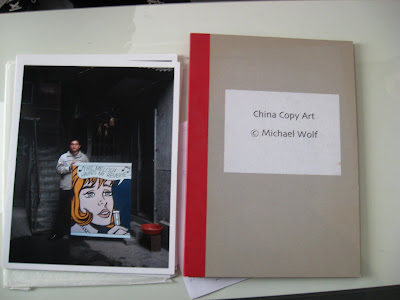 Other work that caught my eye were the portraits of HAN Lei, the pensive interiors of LI Jun, the staged events of LI Wei, and the expansive ecologically bent landscapes of Nadav Kander. Kander's work is included in a book called "Earth" that Steven had on hand. It's the second iteration of a photo prize called Prix Pictet that focuses on ecological issues. The first, called "Water" was surprisingly full of great work, much of it, Susan Derges for example, seemingly unconnected to eco-politics. I added both to my library immediately. Nice little finds if you don't know them already. On Amazon: Earth and Water

Originality is always a point of discussion when mentioning Chinese art. While I found plenty of examples of derivative work everywhere I looked in China, two of M97's artists bear mention for NOT deserving that stamp. Western eyes may see Laura Letinsky in every frame of LI Jun's work but it's really another animal. While Letinsky explores a more formal, art historically inspired world, Li is responding to a particular set of ecological circumstances, namely the omnipresent construction dust that coats everything in Shanghai. ZHENG Nong's abstract work will surely invite comparison's to Silvio Wolf. While there are similarities, Zheng's work predates Wolf's by some years. I don't think you can be pre-derivative. (Look for a future post on seemingly similar work which I will call "parallel development"). Whether online or in person, M97 deserves a look.

Later in the week, Steven treated me to a search for vernacular photos at a paper market one would never find without local help. He combined that with 3-4 meals at haunts that were 150% off the beaten path. One Hunan meal in particular near the gallery was a gem. Ordering in machine gun Mandarin, our table was soon overloaded with beer, tea, and 8 or 9 carefully ordered dishes. When we protested that this might be a tad too much food, we were informed that the whole feast would cost about $30! For 4 people!! If it had only been cheap I wouldn't have cared, but it was yummy. Lots of spice and vegetables I couldn't place. An adventure from beginning to end. Steven, chapeau to you, my friend. You really made the end of my trip memorable and satisfying.

Outside of the M50 district, galleries were more spread out. I was looking forward to seeing what the Chinese outpost of James Cohan had to offer, but they, too, were between exhibits. I checked out Art Labor who are the Shanghai gallery for my friend, Yuichi Hibi. Nice space though I wasn't too excited by the show they had up. Next was 140sqm gallery. Liu Ying Mei, the owner, couldn't have been nicer or more helpful. (She even ran into us the next day and loaned her cell phone and Mandarin when we were hopelessly lost). She seems smart and grounded. The work we saw was interesting, not great. I think she might me a bit hamstrung by finding first-rate artists who aren't already represented, but I would bet on this woman to find her way. I'll be curious to see where she is and who she shows in another year or two. Last was Jean Loh's Beaugeste Gallery. Jean is French born and trained; an advertising guy with a lot of success. He was showing Lu Guang who I spoke about in my first Lishui post. This gallery is impossible to find though worth the effort as one of the few photo-only galleries in the city.

All in all, despite the frustrations, this was a good trip. I feel like I just barely got my sea legs. I'm eager to go back when I can hit the ground running and make a bit more of my time there. I hope I'll get the chance soon.....

Posted by Evan Mirapaul at 5:12 PM