Since I'm not one to wax nostalgic at the end of a year or one to ascribe more to the date December 31 than the fact that tomorrow will be January 1, this will not be a year end round up, look back, best of, worst of, or any other kind of list. Promise. Rather than looking back as an opportunity to summarize and categorize, I thought I would take the opportunity to post a few comments on things I saw that slipped through the cracks. These were artists, events, and exhibitions that I had intended to write about, but, what with my usual procrastination, the moment seemed to pass. So now, in no particular order, some cool stuff I neglected to comment on in 2008:

I fell in love with a little Hungarian book I found at Mai Manö, the Hungarian House of Photography in Budapest, that shows the studio stamps of Hungarian photo studios from 1883 forward. You can look at the cover and order it (in Forints) here, and you can look at the kind of thing you'll find inside by looking here. There isn't a single photo in the book, only the backs of photos, but I love it. It really captures some essence of an age when photo studios were in full bloom. The designs of many of them are Deco or Nouveau, quite ornate and beautiful. The ISBN is: 9789638661845

Also from Budapest is a small book of the postcards of Lenke Szilagyi, published by my friend Attila Pöcze from Vintage Gallery. Mail art was a common thread for artists in the newly open East in the 80s. Ms Szilagyi sent dozens of unique photos glued onto common postcard stock bought cheaply at the post office to friends in Hungary and abroad. It's a remarkably personal and beautiful book. It deserves a show of its own as Ms Szilagyi deserves wider recognition in the West. I believe she would have had a career at least as well-known as her fellow countrywoman Syvia Plachy if she had come west as Ms Plachy did. There are many books available. Check her out. Here's the cover of the postcards book, "Single Lens":

In Berlin at Art Forum I was intrigued by the work of Veronika Kellndorfer at Christopher Grimes Gallery. Ms Kellndorfer explores modernist architecture in an innovative way. She silkscreens her images onto very large panes of glass. The effect is to be actually inside of what she is photographing and looking out into the world. Because the work is on glass, it's highly reflective so you see your own image and the reflection of the room you are in as well as the "vista" the artist represents. As trompe-l'œil it's completely effective and beguiling. I also found its commentary on perspective and space to be satisfying. Whether these are a fair exchange for the challenges of owning such large, fragile work remains a question for me. They are very much worth seeing. Here are a few installation shots from the gallery, though the full effect is of course lost in a photo for work like this. It's interesting to note that the first two pictures are opaque while the second pair are translucent. If you focus, you'll see that in the second two you're actually looking through the glass into the aisle behind the booth: 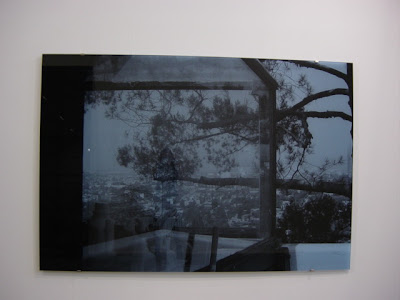 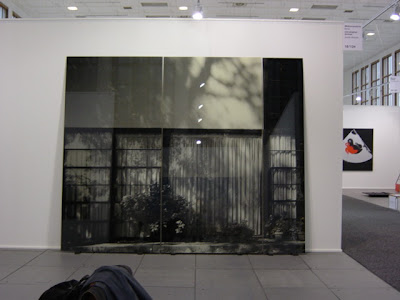 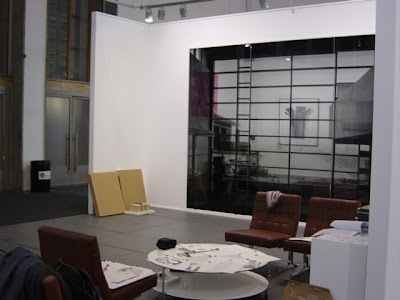 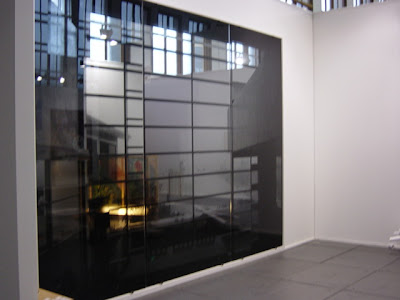 Also during Art Forum, Sarah Oppenheimer had a fab exhibition of her mind-bending, form bending, wood bending sculptures at Duve Gallery. I raved about her work at a group show over the summer at the Mattress Factory in Pittsburgh. This new show didn't disappoint either. An artist to watch.

In Paris during Paris Photo there was an exhibition that was one of the year's best for me. It was called, "Academia, Qui-es-tu?". It was assembled/curated by Axel Vervoordt. Readers of this blog will remember how ecstatic I was over an exhibition in Venice during the biennial called Artempo also curated by Mr. Vervoordt. It turns out that the Paris show is part two of a planned trilogy of which Artempo was part 1. The web site for the exhibition and where you can purchase the catalogue is here. Like the Venice show, this exhibition was presented without wall labels, without text, and without preface. A visitor is handed an exhibition list when you walk in so, if you so desire, you can find out what you're looking at. Otherwise, you are invited to simply look. Simply look??!! Wow, what a concept.

The work on display was, like Venice, a range of styles spread across centuries. Without curatorial guidance, my mind was able to plumb connections, to create connections, and to wander creatively amid a throng of artistic ideas. It was bliss. Mind you, a show like this could easily go wrong. It could have been just a mish-mosh of work and styles thrown together with the hope that there was a connecting thread. For me this was not the case. For example, an Ad Reihardt painting with its cruciform structure was next to 18th century, rectilinear bas-relief. In front of the brooding, sepulchral Reinhardt was an actual sarcophagus. I found these relationships to echo off each other beautifully. 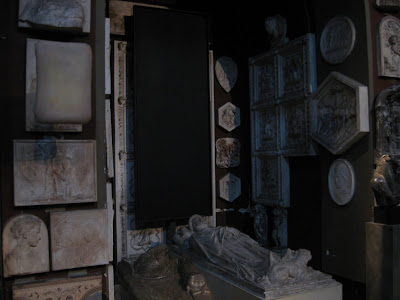 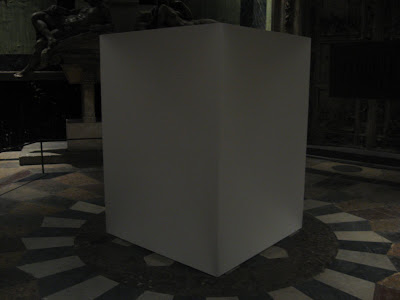 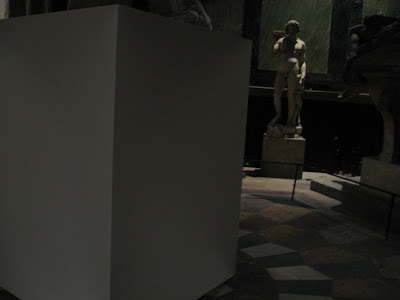 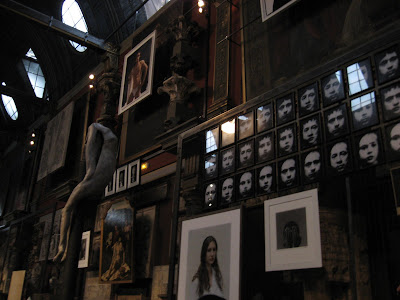 A timeless tableau of work in stone with a detail of the contemporary example by Renato Nicolodi: 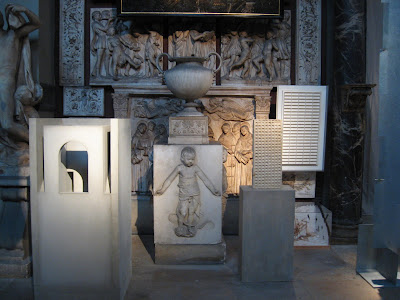 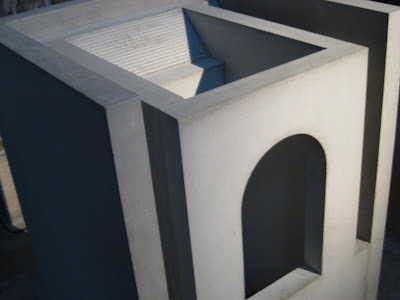 The final third of the trilogy will be at the Venice Biennial next year. Don't miss it.

I saw an unforgettable installation in Bratislava by the Slovak artist, Matej Krén. Titled "Passage", it creates an infinity of books in a space that feels lost in time. Apparently it's been seen in the US, but clearly deserves wider recognition. Some installation views and close-ups: 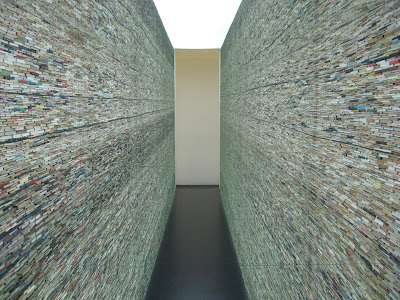 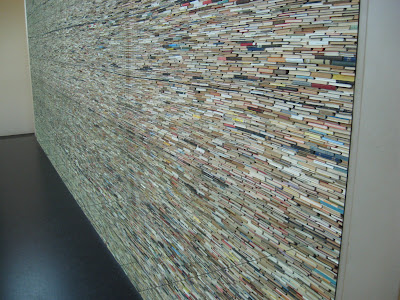 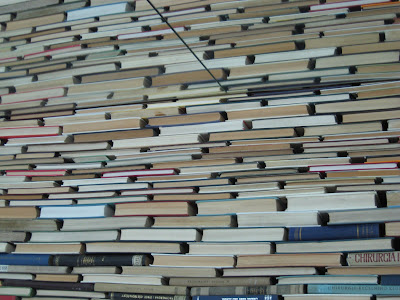 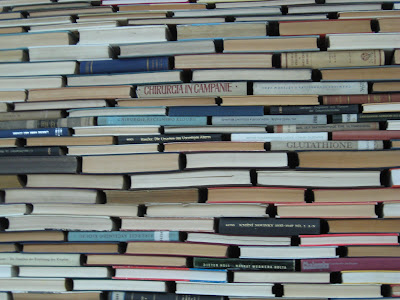 The show in which I saw this was an overview of contemporary Slovak art. There was quite a bit of first rate work. Clearly this country deserves to be seen more on the international stage.

Last. a few shots of a public art work/art creation in Budapest; a large camera obscura project right on one of the main streets. Public Art Fund take note, this would be a fantastic project for New York. 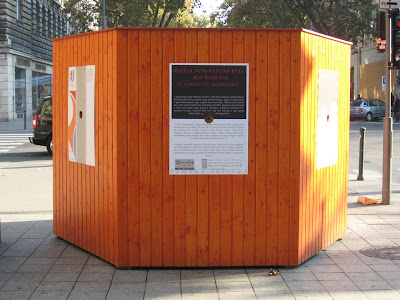 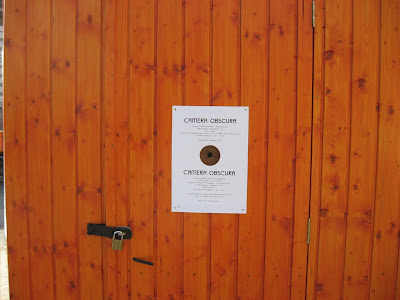 Thank you to all of my readers in 2008. My number of hits grew substantially this year. I am grateful to you all. More to come in 2009. It's 11:49 as I type this last period. I snuck this last post in just under the wire!
Posted by Evan Mirapaul at 9:34 PM