Establishing a taxonomy for my Creative Destruction (CD) idea has been challenging. What is the simple definition of destruction? How is the art I include different from collage? If the artist is not intending to represent the idea of destruction, is it still destruction if I see it that way?

These ideas were all vying for attention as I looked at the work of the following three artists while I was in Miami. The first artist, Tim Hyde, was perhaps my favorite artistically, but the most problematic in terms of including him in CD. One could certainly argue that Mr. Hyde simply engages in classical collage technique. I'm not so sure. I think two factors argue for his inclusion in my CD category. First is his surgical precision in slicing then repositioning his photos into a seamless construction. This means he is taking multiple photographs of a scene expressly to cut them so they will fit into a deconstructed scene. Second, I think the fact that he is playing with time and space by using multiple shots of the same locale gives me the idea that he is slicing his work in his head even as he is taking the picture -- i.e. there is no intention for the photograph to ever remain whole. It will be "destroyed" in order to be used creatively in the whole. I think this is a key distinction. The pristine object is created in ORDER to be taken apart. It is not found or included whole.

On an artistic level, I am very taken with this work. I love how his constructions make ordinary space sculptural and how it bends the time/space parameters of a two dimensional object. He shows at Max Protech in NYC. Here are a few examples. 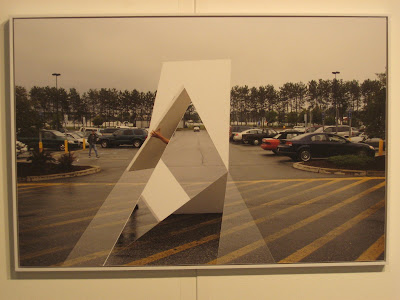 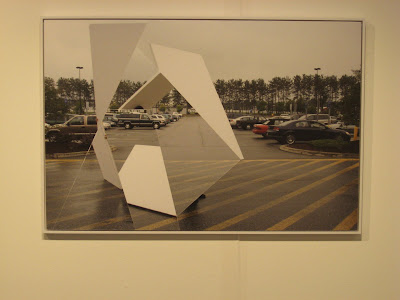 Next up for debate in my mind was Roberto Pellegrinuzzi showing at Pierre -François Ouellette Art Contemporain. Mr. Pellegrinuzzi makes images by layering bits of information on multiple layers of plexi or glass. It's unclear to me whether the image starts its life as a whole photograph which he then slices down to bits a reconstructs in a multi-layered form. If that is indeed his process, well, I'm sold that he's solidly in the CD camp. If his process is somehow more arcane than that or if he "paints" with bits of film in order to create an image, then I would say the art is still fascinating but it maybe doesn't quite fit in CD. The few images I saw were lovely, complex and beguiling. I'm told that he has a diverse and interesting practice that includes large-scale installations. Worth taking a look especially because Pierre-François runs a fine gallery with a top, top program. Here is an example that is not terribly elucidating. It's tough work to represent in a photo: 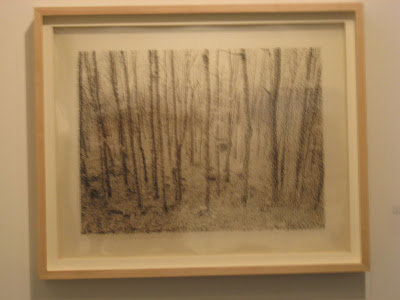 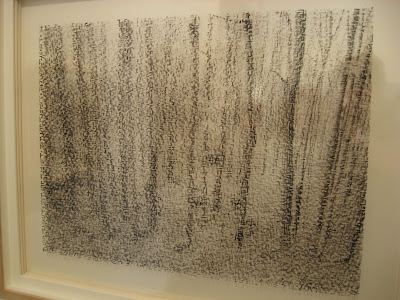 The last artist I'll discuss in this post was the easiest from a taxonomic point of view. The fact that his images are cut, torn, and finally sewn back together with thread are an easy call for inclusion in CD. His name is Germán Gómez. He was showing at Galería Fernando Pradilla. Mr. Gómez' work frequently explores homosexual themes, especially as that relates to outsider status, legal status, and gays' relationship to the church. In the work that is explicitly CD, he usually uses multiple models whose parts are cut and torn then sewn back together as one figure. The sexual and human metaphors are obvious but I find the work quite successful.

In a series called "Registered and Tattooed", he photographs men he has known that have been tattooed with some idea from Gómez' life. Then, a police dossier is created which shows the man with the tattoo as an identifying (and, perhaps, prosecutorial) device. The relationship between the personal world of homosexual love relationships and how the law sees them is bleakly portrayed. Strong work.

So my search for an all-inclusive definition of Creative Destruction continues. The important thing for me is that the process of sorting it out leads me to interesting and compelling work. As always, I invite your thoughts and suggestions.
Posted by Evan Mirapaul at 10:40 PM