I spent a very satisfying few hours last week at the open studios of the Elizabeth Foundation of the Arts on 39th St. I've been going to this annual event for a few years now, and so, far, it has been a reliable window into some new, exciting work for me. Part of the pleasure is in finding new artists, and the additional pleasure is seeing the progress of work by artists who have been in residence for more than a year.

Here is a link to all current full-time EFA studio members, many with hyper links to see more of their work.

The studio that I would have easily missed without some prior knowledge was Sarah Oppenheimer. Regular readers of this blog may remember how impressed I was by her installation at a Dara Meyer-Kingsley curated show at the Mattress Factory in Pittsburgh last summer. Since there were no completed works in her studio, it was easy to pass her by. But if one ventured in, you were treated to drawings of in process work, photos of completed ones, and a few maquettes of upcoming ideas. 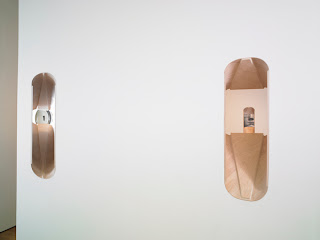 Sarah consistently explores the idea of space; what is interior and what is exterior. Her installations challenge our preconceptions of the veracity of our point of view. What seems near is far; what seems far is near. The constructions I've seen use relatively simple tools and methods, but use those tools to bend our ideas of space and boundaries. I am eager to see more.

Brian Whitney is a photographer who has been working at EFA for a few years now. I like his work more and more each time I see it. He appeals to my process wonk self in that he uses x-ray photos, negative printing, and, most recently, duraclear film installations in his work. But Mr. Whitney is no slave to technique for the sake of novelty or to show off his knowledge of arcane process. Each technique is carefully chosen to illuminate an idea or to support a conceptual philosophy. Check him out here.

I was unfamiliar with the work of Cui Fei. I quote here from John Goodman's article about her from Art in America, 2003:

In Manuscript of Nature V (2003), Cui created a fairly large installation composed of tendrils pinned in vertical rows on a wall. From a distance, the small, linear forms looked like calligraphy; up close, they revealed themselves in eccentricities, curling up and out against the wall and generally maintaining a poetic grace. In A Letter from Home (1999), Cui pinned tiny leaves to white foam board in horizontal rows, mimicking the form of a letter written in a Western language in exactly the 8 1/2-by-11-inch size of a standard page. The brown leaves are pinned at various angles to one another and spaced as if forming words, but their solidity rather than linear openness recalls cuneiform. She may be setting the universality of natural materials against the near-universality of written communications, without tying this expression to a particular culture.

I love faux text work. The idea that something can have the appearance of language while not actually communicating words is tremendously communicative to me. I find this work immensely seductive and beautiful. It ties to a tradition of Asian calligraphic practice while being completely sculptural and modern in its execution. She also photographs her work. Unlike many artists who use photographs to expand their commercial range, Cui Fei's photos seem honest and distinct enough to stand on their own. Very much worth a look.

That's a quick look at a few of the artists who particularly caught my eye. There were more, and I could go on and on, but it's much more fun to go and look for yourself. Sign up for email notification of the next open studio days and make time to go take a look. It's great.
Posted by Evan Mirapaul at 12:32 AM