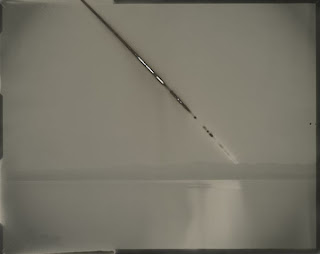 PHOTOGRAPHS
FROM THE SUNBURN SERIES

Last week I went to the opening of Chris McCaw's new work from his Sunburn Series at Michael Mazzeo's gallery. I had seen the work before when Mr. Mazzeo showed it as part of a group show last year. I remain impressed. I don't know why I'm so taken by process oriented work lately. I'm becoming a real process wonk. Still, it would be hard not to be engaged by the method by which Mr. McCaw creates his art. I quote here from the gallery press release:

Employing only the most basic elements of the medium: camera, lens and paper, McCaw documents a celestial and terrestrial landscape transformed by long exposures of the sun traversing the sky, scorching, and often burning its path completely through the photographic paper. The intense light further alters the image, paradoxically turning day into night. The large-format Gelatin Silver Paper Negatives, each created in-camera, range in size from 8 x 10 inches to 20 x 24 inches.

I understand from speaking with Mr. Mazzeo that McCaw discovered his method by accident. He fell asleep one day while making an extra long exposure of a sunny landscape. He woke to find his camera literally smoking. Curious to find out what was left on the film, he developed the damaged negatives. He was dissatisfied with the results, but, sure that he had a kernel of a good idea, he continued to experiment with the process for 3 more years until he found the path to the work he wanted.

The foundation of his process goes back to the very foundation of photography itself. We know that the first photographers who successfully fixed images on paper used a printing out process that used the sun to reverse light sensitive chemicals. His work also relates to the much used photogram idea, like Man Ray and Maholy-Nagy made famous. The difference is that a classic photogram is a camera-less process, while Mr. McCaw's is very much dependent on a camera and a lens. It's kind of a combination of a Camera Obscura and a photogram.

Even though the burning of the paper is unique, the aesthetic principal has been explored by a few others. I think of the Sea series of Hiroshi Yamazaki: 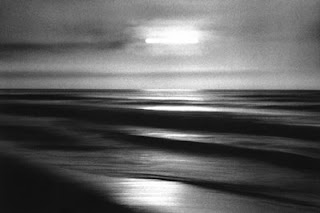 I think of the Concetto Spaziale series of Lucio Fontana: 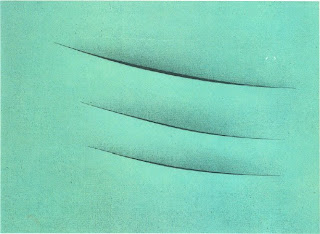 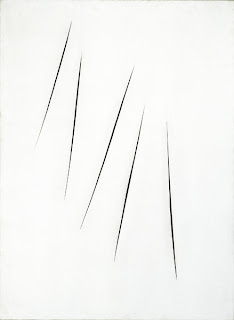 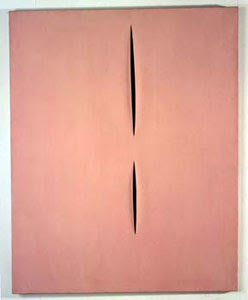 And most directly, I think of the Heavenly Bodies series of Richard Misrach: 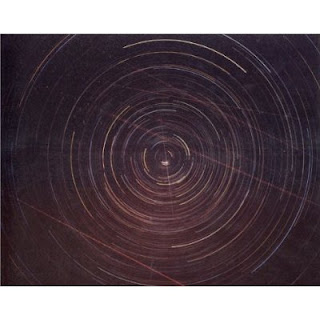 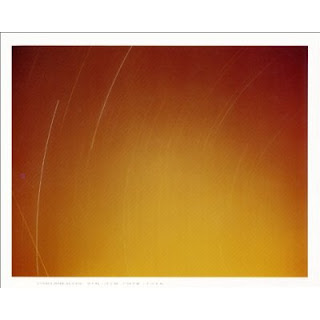 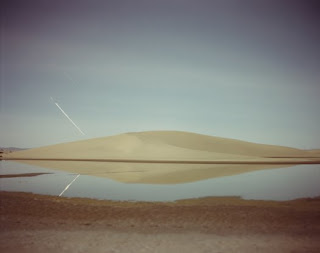 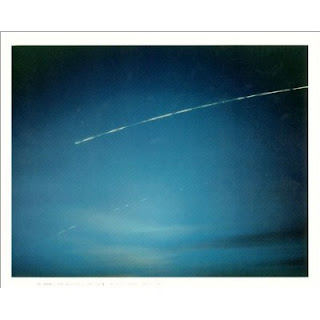 But that is not to say that this series is derivative in any way. Mr. McCaw speaks with his own sure voice. I hope he takes it as a compliment that I am inspired to relate his work to the art of these other great artists. The most successful works to me are the pictures which focus on the destruction of the paper as an abstract device within a composition which is at the fringes of abstraction. I love the tension between what I know to be a once-in-a-lifetime moment that is captured photographically and an image which is virtually unrecognizable as nature. Just as in Fontana, I love to see the violence in the paper; the burned edges and gaps which explode the illusion of 3 dimensionality in a 2 dimensional sheet of paper. The charred holes both diminish the effectiveness of the object as a photo and expand its effectiveness as a work of art with layered meaning. Super. Check it out.

Posted by Evan Mirapaul at 6:36 AM