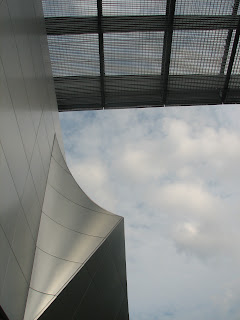 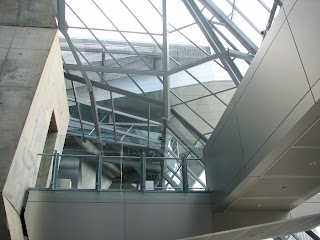 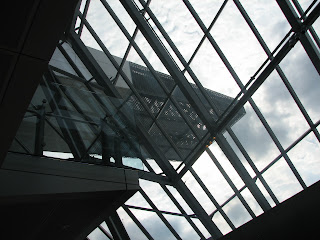 Ok, I'll confess up front, with pride and a straight face -- I was born in Akron, Ohio. This area that was famous for rubber factories, burning rivers, and skies made rainbow beautiful from the pollution burning off in the lower atmosphere, is nothing like what it was in the days of my youth. Still, then as now, northeast Ohio is filled with fine artists and remarkable cultural institutions.
One institution that has run in a thread through my entire life is the Akron Art Museum. It is where I took my first art classes and learned about primary and secondary colors. It's where my father took art classes and met the community of artists whose work still hangs on his walls. Later, I met director Mitchell Kahan and chief curator Barbara Tannenbaum who came to the museum in 1986 and 1985 respectively. They introduced me to Duane Michals in person and to the work of Hiroshi Sugimoto, Harry Callahan, and Ralph Eugene Meatyard in the collection. The Peter Keetmans I own I first saw at the exhibition in Akron of the Irmas collection of self portraits. It is one of my favorite all-time shows.

The Akron Art Museum embarked on an ambitious expansion project a few years ago. Last July the project reached its completion with a gala re-opening of a beautiful new space and a dramatic increase in its gallery space. (Read more about the new building, the architects, and the museum at http://www.akronartmuseum.org/). Today, at the invitation of Mitchell and Barbara, my family and I had the pleasure of a private tour of the new museum space and the collection. 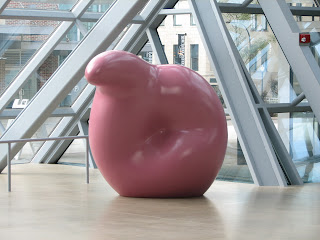 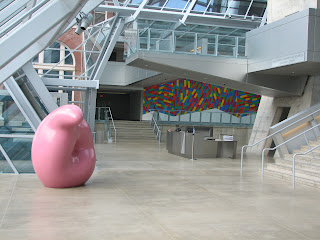 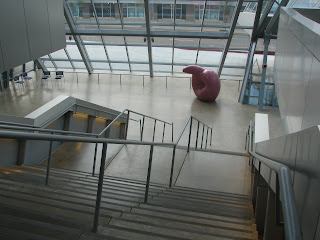 Above you can see a few pictures of the new lobby which feature a Claes Oldenberg and a color wall drawing by Sol LeWitt. To those of you who may be surprised to hear the names Oldenberg and LeWitt mentioned in the same sentence as Akron Art Museum, prepare to be genuinely astonished. The Akron Art Museum has some really, really good art. Art that would be at home in any major institution anywhere. And lest you think that Akron is just following in the wake of its bigger city sister museums, one look at acquisition dates on the exhibition cards tells you that this museum has been consistently ahead of the pack.

My favorite example of this refers back to my blog from the Venice Biennial. Remember those massive, byzantine, bewitching wall hangings from El Anatsui? Well, guess what the Akron Art Museum has. I was informed by Barbara that the Biennial catalog needed to use a photo of the one in Akron because they couldn't get photos of the Venice ones in time for the catalog. Cool.
Also, Akron has a stunning display of the work of Chuck Close. Next to a large scale painting of "Linda" are 5 dye transfer "studies" for the painting. Each photo is gridded out in Mr. Close's well-known detailed working method with paint on the margins exploring the palette necessary to match each layer of the dye transfer emulsions. That the artist took the time and care to make a dye transfer for each stage of his working process shows that these photos are not just studies. They also cast brilliant light on the finished painting. It was a treat to see.
Also on view were first rate work by Doris Salcedo, Oscar Munoz, and two sculptural chairs by Yayoi Kusama. Mitchell confided that one of these were donated from a gallery that, at the time(1970), couldn't find a buyer. The other was donated by a collector who had bought it from another collector for whom the work was just too unusual. Mitchell still thinks they're marvelous, but he mused that the fact that they are much sought after now points to the fickle nature of the art market.
Akron Art Museum has long had a reputation for its photographic eye and photo holdings. When the noted photographer John Coplans was its director, he brought many of his colleagues to show at the museum and a few found their way into the collection. Barbara Tannenbaum has furthered and expanded on this history. Some of you will know her from her work on many well known photo books including an important monograph on Ralph Eugene Meatyard.
In 1991, the museum started the Knight Purchase Award for Photographic Media. With a grant from the Knight Foundation, Akron Art Museum was able to collect in relative depth work of a variety of living artists. Often, the purchase of the work from the Knight Fund, spurred local philanthropists to add more work by the same artist. The roster of artists that have been chosen is remarkable not only for the high level of art but also for the fact that there are no weak links. If you look at the roster of prize winners at any cultural institution, one expects to find hits and misses. It's inevitable. I challenge anyone to name the weak link in this roster:
Vito Acconci
Dieter Appelt
Harry Callahan
Sophie Calle
John Coplans
Samuel Fosso
Adam Fuss (including one of my favorite smoke photograms)
Gilbert & George
Eikoh Hosoe
Isaac Julien
Mary Ellen Mark
Richard Misrach
Oscar Muñoz
Robert Rauschenberg
Thomas Struth
Hiroshi Sugimoto
Carrie Mae Weems
As we toured the exhibition space devoted to the Knight purchases, I was struck by the depth represented of each artist -- a room of Callahan, a room of Sugimoto, a wall of Weems, a room of Misrach. This is a fabulous collection. Its been put together with love, intelligence, connoiseurship, and taste. It also points to what can be done with a limited initial gift when it is handled so deftly. One doesn't need to make a Rockefeller-sized gift to me the seed of an important and satisfying collection. Other smaller institutions would do well to study Akron's example.
Though Akron is prettier than it was when I was boy, I still can't say that it's a destination travel locale. But if you want to see a really exciting and satisfying art collection with an emphasis on photography, go to Akron. You won't be disappointed.
Posted by Evan Mirapaul at 11:20 PM