I reported in Lishui Part 1 that it seems impossible to summarize or draw conclusions based on a very short visit to a giant country. So I'll proceed here with caution. Even taking into account my restricted, small sampling slice, I'll venture to say that some impressions of general trends peeked through. Though I heartily admit that these observations may be wildly off base, I'm going to just lob them out there anyway. If they spur some heated debate and objections, perhaps it's all to the good.

The Chinese photography I saw on this trip fell into 3 broad categories: classical documentary practice, technically proficient but merely pretty work (calendar art), and work that mimicked Western work in significant ways. I know from experience that there is individual, unique Chinese work out there, but I didn't really see it on this trip. That's not to say that I didn't see very high quality work. I did. But it tended to fall in the documentary category as opposed to highly original art.

Wherever we went during the festival, the Chinese photographers rarely operated outside of a pack. It seemed there was some kind of group pressure to photograph the same thing at the same time. It happened countless times: 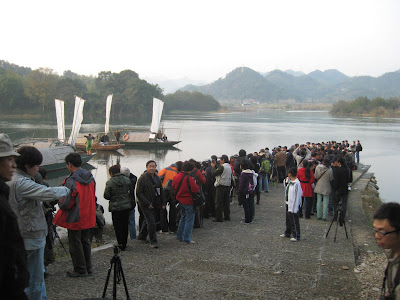 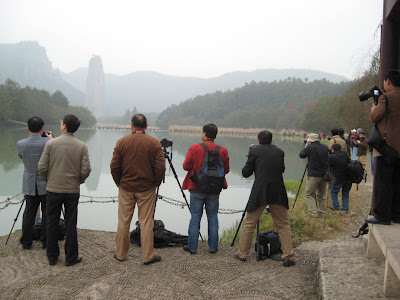 The photo above perhaps highlights a differing mindset between the Eastern and Western photographers. This was at Donghu Park. I wrote in the last post about the funny sign that said "Long Term Bosom Understanding". 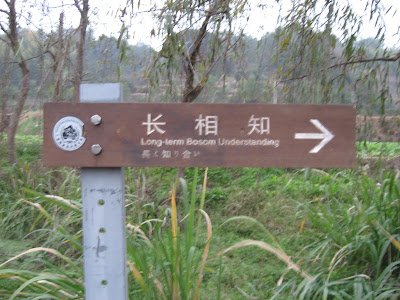 Well, here's a wider shot of that same scene: 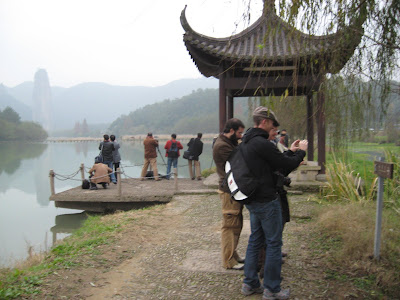 The Chinese photographers are all photographing the the beautiful landscape, and the Americans are photographing a funny sign. Can we draw broad conclusions from this photo? Perhaps not, but it seemed like I could when I was taking the picture.

As I usually do, I'll focus on the work that I liked. There's no need to dwell on the banal or commercial work I saw. The only confusing point was figuring out what was intended to be what. Context and intent were persistent challenges the entire trip from the best work to the worst. Chinese work was displayed in 4 venues: a few of the exhibition halls in the Forest Park (where the Western artists were) were given over to Chinese art, The Oil Pump Factory Buildings, an outdoor makeshift exhibit space near an amusement park, and an outdoor makeshift exhibit that highlighted 2 artists' work from Cuba and Korea. From a contextual point of view, the exhibition space near the amusement park was the most confusing. It was full of really bad, genre, stock image pictures. Was this commercial work? It was displayed as art. Was I confusing a commercial fair section of the festival with other work that was meant to be "gallery" work? I couldn't tell and no one had an answer. I didn't spend much time here.

The best work was at the Oil Pump Factory. I am embarrassed to say that, while I travel the world to look at art, I often miss what is right here in New York City. Two of my Lishui "discoveries" had had major play in New York, and a third had been exhibited internationally as well. I suspect their names will be familiar to many of you even though they were new to me.

The first great work I saw was that of Lu Guang. The fact that he was the winner of the W. Eugene Smith Grant in Humanistic Photography just 2 months ago must have bypassed my radar (I was even invited to the award ceremony, for heaven's sake!). Lu Guang is knee deep in a huge project to photograph the seven major rivers of China and the epic-scaled pollution that is happening in all of them. He has completed three of them, and his dangerous, politically charged work continues. A few examples here and then an even more complete portfolio if you click here. 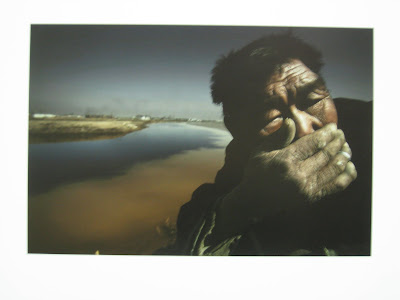 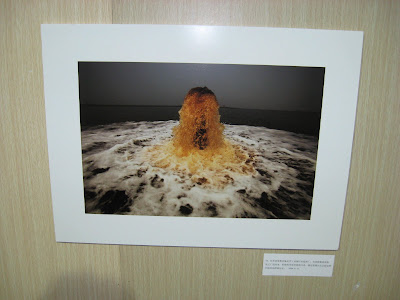 Next up in my walk of ignorance was the work of A Yin. I was impressed with his sensitive and visually dynamic series about nomadic Mongolian peoples. Apparently the Rubin Museum thought so too since they had a solo show for him here in New York 2 years ago. 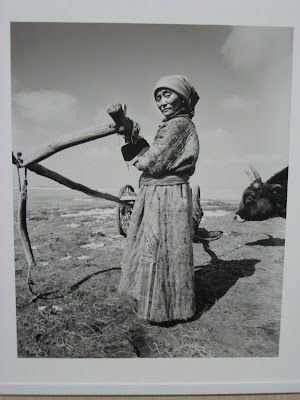 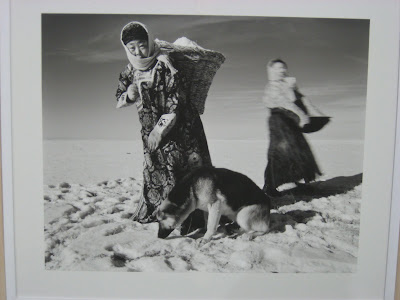 Perhaps slightly off the beaten track were the diptychs of Hu Li. The artist shows the same coal mine worker once as he emerges from the mines covered in soot against a white backdrop, and again in his street clothes against a propagandist backdrop. To my eyes this work looks like a statement about the dehumanizing effects of working in the mines. It was sometimes literally impossible to tell that it was the same person in both photographs because the soot had so erased the details of his character. But our old friend "context" rears its head again here. Reading the artist statement on his gallery website, the work seems more intended to be a paean to Hard Work and Progress. Is there irony here? Submerged political defiance? I don't know. I liked the work even without a clear decision from me as to the intent of the artist.
Left side detail: 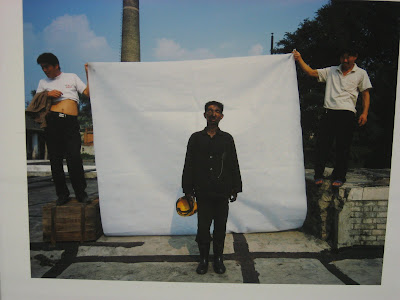 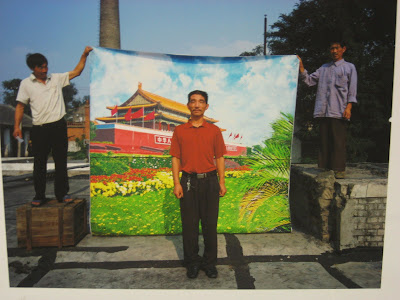 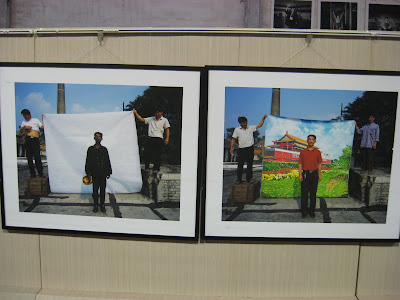 Context is everything when evaluating (re-evaluating?) the work of photographers who were employed by the Chinese government as propagandists. Discussion is hot right now about how we should view these works. Sha Fei is one photographer that is right in the center of it. There's a show of his work in January at Ohio State University and various symposia have included his example (see my blog from Houston Fotofest about him). Add to this debate the work of Zheng Weihan. In his Scenes From the Past we see overtly staged propaganda images from the Cultural Revolution. With Western eyes, I can see the work through a filter of other staged photography and ironic views of 60s-70s culture. But that doesn't seem to be what's going on here. A quote from his gallery website:

As older generation artists, Zheng and many "revolutionary photographers" from that era, their "staged" works are as truthful. Zheng has his own personal concepts -- only this concept was hatched out of the “Ideology of the Cultural Revolution.” Zheng lost himself in this truthfulness back then, but because of this "loss",it makes his imagery very "contemporary. "


When I asked his gallery rep, from Inter Gallery in Beijing, she said that the work was very popular among young Beijingnese because this represented what really happened during that period. There was no re-examination of the purpose or factuality of the pictures, she claimed. Maybe. I think the pictures are visually arresting and somewhat alarming. Though many different interpretations are possible, I suspect they will take their place with propaganda posters in the art world, but I will leave it to the scholars to sort that out. My fear is that the reality is more on the order of thinking that old pictures reprinted in a large size will sell in a new market. I hope the truth is more layered than that. 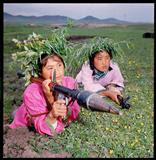 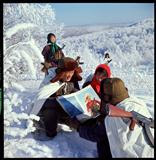 I'll go into more Chinese work that I saw in Shanghai in a later post. By some accounts there was more intriguing work to see at the Oil Pump Factory. Unfortunately, the official schedule left us little time to explore. When we went back for a closer look, the exhibition was already coming down. Everybody's loss.

Next: Western work in Lishui.
Posted by Evan Mirapaul at 10:14 AM