A list of A-List work I saw at Miami/Basel

In no particular order and with hyperlinks where I could find them:

Thorsten Brinkmann had his first showing on this side of the Atlantic with Berlin gallery Kunstagenten (www.kunstagenten.de) devoting their entire Scope fair booth to his photos and sculptures. I have been a huge fan of his work since I stumbled across it at ArtForum satellite fair, Kunstsalon, 2 years ago. It seemed that he was a big hit with a number of museum curators taking notice of him for the first time. Check it out on the gallery website. It's wonderful work and going fast.

Felix Schramm - Really intriguing photo collage. His sculptural work revolves around destruction and re-formation of space. In his photographic work, he photographs his installations then tears up the photos to use as materials in photo collage. There are no photos of the photos on this website, but you can find the work at this gallery. http://www.grimmrosenfeld.com/

Miyako Ishiuchi - Remarkably fearless and unblinking photographer. Hardly known here even though she was the Japanese representative at the 2005 Venice Pavilion. Two portfolios on view at Photo Miami were amazing: "Mother's" and a group of portraits of a 90+ year old Butoh dancer. The "Mother's" series includes shots of her aging mother mixed with details of her possessions, some of them post mortem. Beautiful and horrible at the same time. Filled with love and obsession. http://www.thethirdgalleryaya.com/

John Slezaker - I have blogged on this artist before. He was part of a large show at the Rubell Collection as well as a solo artist booth at the main fair by "The Approach Gallery", London.

Danica Phelps - I have been following this artist for over a year now. I saw her in the Daimler-Chrysler collection show in Berlin last month. Sister Gallery, LA (http://www.sisterla.com/) and Ritter/Zamet Gallery, London (http://www.ritterzamet.com)
were showing fine examples. Zach Feuer in NYC also shows her. I have to get off my butt and actually buy one. I love the combination of minimalist aesthetic with the obsessive indexical calculations. It's very personal and autobiographical work, but in such an objective way. I can get lost in the graphical nature of the visual field or start looking at the budget details of every day for a month.

Corbin Walker was represented at Green on Red Gallery http://www.greenonredgallery.com/.
Tremendous computer generated work on paper. He writes a program that taxes the computer and the paper to their very limits. Once he has a print with which he's satisfied, he destroys the program leaving a one-of-a-kind image. Super.

Hew Locke had sculpture and photographs in his signature over the top voodoo baroque style. I thought the photographs were irresistible. Hales Gallery London teamed up with Pierogi and Ronald Feldman in a warehouse in Wynwood. An oasis for art lovers. http://www.halesgallery.com/

Matt Ducklo takes pictures of blind people as they are given access to touch and experience sculptures in museums. www.elevenrivington.com

Adam Fuss showed more of the smoke photograms I love at Galerie Karsten Greve including a non-photogram platinum photo that bewitched me. At Xaverier Hufkens Gallery I was shown African mask photograms that the artist produced specially for the gallery and which are only for sale in Belgium. www.xavierhufkens.com 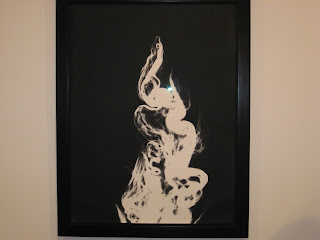 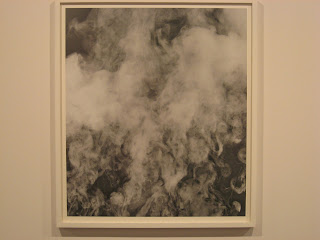 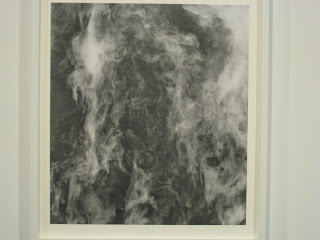 Latin american op-art sculpture was everywhere. Art Miami fair could have been billed as the greatest exhibit of Latin American Op-Art ever. Walking through the fair was a treat if only for this reason.
Posted by Evan Mirapaul at 6:02 PM