I spent the last 5 days at the Berlin art fair, Art Forum, and the 3 concurrent satellite fairs: Preview, Berliner Liste, and Kunstsalon. I came for Art Forum for the first time last year and loved it so much, I made a point of coming back this year. Berlin is a wonderful place for art fairs. There are so many interesting large scale buildings and sites it seems that looking at the venues becomes part of the adventure. Art Forum takes place in the Berlin Messe Halle (as it did last year). The website describes the venue as having "spacious exhibition halls with 15m ceilings and natural lighting along with the Palais am Funkturm built in the 1950s providing an ideal setting for the experimental display stands and lounge designs typically found at ART FORUM BERLIN". It's a beautiful and spacious place to see art. The 3 satellites were all at different venues from last year. Preview was at a hanger at the famed Tempelhof airport. Liste and Kunstsalon were at repurposed industrial sites. They all have a scale and atmosphere that I simply don't see at other cities' art fairs.
Another pleasure of Art Forum is that it has a truly adventurous spirit. There is much less "blue chip" art on display than at the other big city fairs. This means the satellites aren't a ghetto for younger artists and experimental work. Of course, this means that there's a lot of art that misses the mark or is not destined for bigger things. Great! The whole weekend feels like one big studio visit. Left and right one is exposed to unfamiliar work. If this was ever the goal of Art Basel, FIAC, and Art Cologne, it is now long gone at those fairs. In the same spirit -- and maybe because there has been such a mushrooming of new galleries in Berlin -- there are a lot of smaller and unfamiliar galleries at these fairs.

It seemed that there were some ideas or materials that were popping up in more than a few places. I saw a LOT of work that used mirrors - photos on mirrors, sculpture made with mirrors, mirrors incorporated into a variety of genres. It's not like this is a new idea, but I believe I was seeing more of it than I've seen for awhile.

Another form I saw many times was the architectural maquette. At Kunstsalon, one gallery had a model that must have been 2yards x 3 yards and showed a city block both in exterior and in cross-section. But there were 2 examples that I thought were particularly noteworthy. One was at Zak Gallery, a newer entry on the Berlin Linienstrasse (http://www.zak-gallery.com/). The artist is Szymon Kobylarz. The website describes the work accurately as follows:
"The series Architektura, consists in part of paper models based on existing buildings in Polish cities. By accelerating the effects of time upon them, and by exposing them to the effects of water and fire, Kobylarz reduces the models to rubble. As though the buildings were predestined to collapse even before their construction, the models – no longer immaculate proposals for the future – have already collapsed. They remind us that even our most stable and concrete buildings are less than certain, indeed, less than enduring. "

The other maquettes I saw were the work of Maurice Van Tellingen at Ulrich Mueller Berlin (http://www.ullrichmuellerberlin.de/). Mr. van Tellingen makes a combination open light box/interior maquette that he combines with a small speaker to make an arresting small wall envirnment. They were beautiful and engaging. 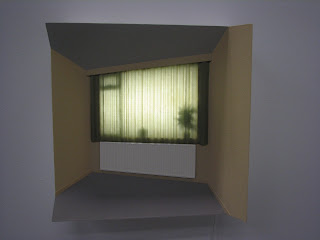 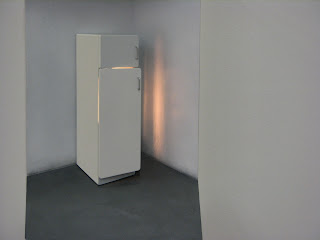 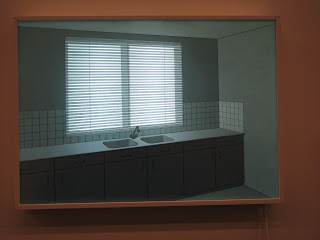 Have I forgotten that this is a photoblog? No. But this three dimensional approach also found its way into a lot of photographic work.

Ji Yeon Heo (http://www.galerie-schuster.de/)is a recent graduate from the class of Thomas Ruff. She employs the technique made famous by John Baldessari of using photos laminated onto foamcore in order to create a multi-layered photographic surface. Here are two views of the same work that show the literal depth of her work. 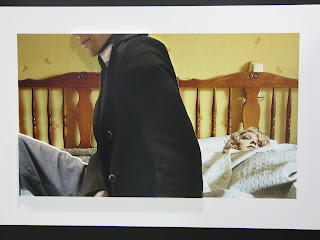 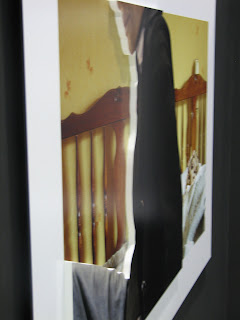 Her models are mannequins and her tableaux are scenes that recall soap operas or perhaps the covers of dime store novels of the 50's á la Thomas Allen. To my eyes, the work seems fresh and intriguing though rooted in multiple art traditions. I am eager to watch as she develops.

Those who remember William Ewing's "Re-Generation" show at Aperture will recall Martina Sauter's 3-dimensional explorations of cinematic frames combined with a mundane domestic frame. The best of them are thought provoking to me. 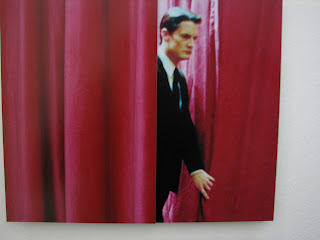 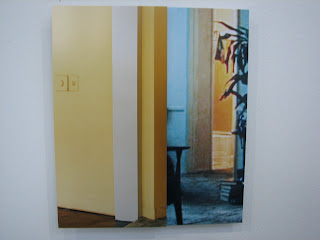 At Brussels gallery L'Usine, Jean Charles Delange explores 3 dimensionality by creating a sandwiched sculpture of glass, and then photographing the object with various lighting and angles. In the first image, the sculpture is displayed in front of the photo it generated. One sculpture can yield multiple photographic works as these two images demonstrate: 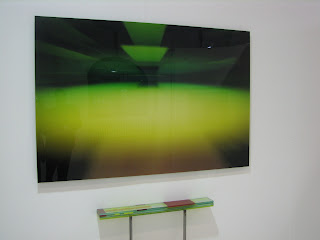 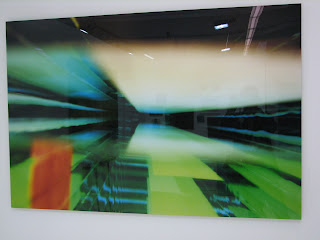 Artist Frederic D. from Berlin gallery "Nice and Fit" (http://www.niceandfitgallery.com/) had a large scale work mounted to sheets of plastic. The result was surprisingly evocative. There was a craquellin effect on the surface of the plastic plus the surface of the plastic was wavy and textured. The subject of the work was a woman the artist had encountered by chance, but her affect was one of Madonna-like grace taken from 17th century painting. I'm not one to advocate technique over content, but this seemed like a happy marriage. 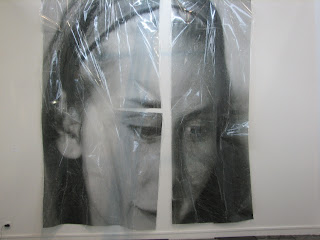 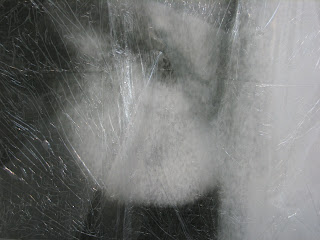 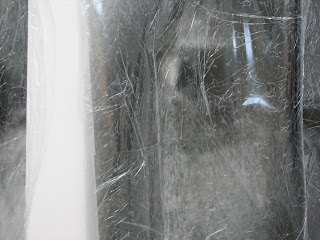 But the real find for me was Thorsten Brinkman. I first saw his work at the booth of Kunstagenten gallery at last year's Kunstsalon. This year year the gallery was showing at Preview. Mr. Brinkman creates whole environments. He builds the booth like a diorama in a natural history museum. He uses found elements of carpeting, rugs, paneling.....junk, to make sculpture, furniture, and atmosphere. But the stars of the show are the photographs. He makes self-portraits adorning himself with he same junk that fills the "room" and then positions himself in mock heroic classical poses. The result is a a scene that riffs on classical architecture, classical paiting, and classical decor. It's witty and fun with a sarcastic and serious underside that invites lots of further study and reflection. I'm hooked. 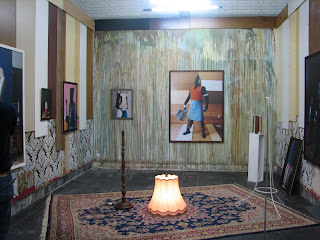 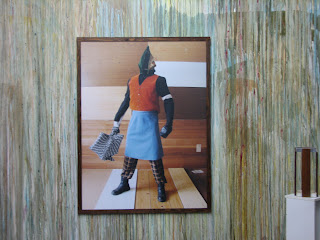 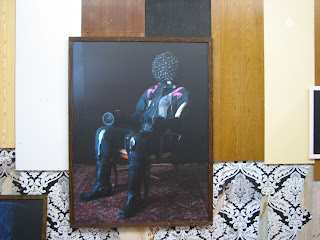 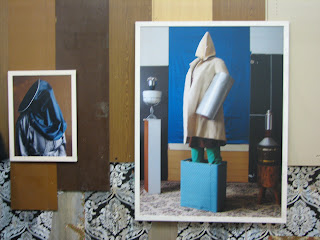 Posted by Evan Mirapaul at 1:40 AM