The PGH Photo Fair is pleased to announce the PGH Photo Fair Speaker Series. The PGH Photo Fair, through the auspices of Fugitive Vision, LLC, will sponsor informative talks on photography at a variety of venues in Pittsburgh leading up to each edition of the fair. The series aims to augment the already rich art and photography scene in Pittsburgh with speakers who will focus on the nuts and bolts of collecting including connoisseurship, the state of the art, and an insider's view of the market.

This evening is an opportunity to hear how a broad range of collectors have started their collections, have changed their strategies over time, and to hear their views on the market today. Panel discussion followed by audience Q & A.

Daile Kaplan is Vice President and Director of Photographs & Photobooks at Swann Galleries, where she is also an auctioneer. Daile appears regularly as a photographs specialist on the PBS television program Antiques Roadshow, and has also appeared on The History Channel, HGTV and The Discovery Channel.

Ms. Kaplan will speak from her broad experience in the auction world using details from past and upcoming sales to introduce us to the pleasures and perils of auction buying. Guest speaker presentation followed by audience Q & A.

Sam Berkovitz is the Founder and Director of Concept Art Gallery in Pittsburgh. Mr. Berkovitz is a licensed auctioneer and certified member of the Appraisers Association of America.

Mr. Berkovitz will lead a show and tell of photographic works by artists who are either from Pittsburgh or worked extensively here. Luke Swank, W. Eugene Smith, and Clyde Hare will be featured. Examples of each artist's work will be available for examination and discussion.
Posted by Evan Mirapaul at 1:33 AM No comments:

Posted by Evan Mirapaul at 11:10 PM No comments:

Barron's/Penta panel on collecting including me...

Richard Morais from Barron's magazine invited me to participate in a panel on collecting which was held at Bonham's auction house last Wednesday, January 29th. Richard's journalistic professionalism and thoroughness was a treat (and a rarity these days). It was a pleasure to be a part of the process as well as the final event. A link to his blog about the event is here and includes a short video of each of us on the panel talking about a detail of collecting. Its an especially germane topic with PGH Photo 3 just around the corner! Pittsburgh collectors, please take a look.....
Posted by Evan Mirapaul at 7:18 PM No comments: 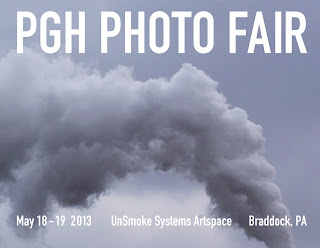 It's finally here - the PGH Photo Fair weekend we’ve been leading up to for months through our incredible speaker series! Join us all weekend long for a fabulous lineup of exhibitors, activities and culinary delights. We kick off the festivities with the Next Level "Thank You Pittsburgh" celebration on Thursday and swing right into the fair on Saturday at noon. Please come out and show your support, we can't wait to show you how we've grown!

Check out all we have planned for you below:

Sheyi Bankale, editor and founder of Next Level & PGH Photo Fair combine forces this Thursday evening to throw a ‘Thank You Pittsburgh’ celebration. Join us to welcome all of the people who made the Pittsburgh edition of Next Level a success from funders to artists and writers. This event is also a celebration to launch the weekend of PGH Photo Fair. Salt of the Earth will be supplying lite bites and drinks will be provided by Clique Vodka and Penn Brewery. DJ Soy Sos will set the mood with his musical stylings.

PGH Photo Fair returns for a second year this weekend, Saturday May 18 & Sunday May 19 at Unsmoke Systems Artspace. This year, PGH Photo Fair will host twelve internationally known dealers to exhibit museum-quality prints and photo-based art spanning the history of the medium, from nineteenth-century vintage prints to contemporary photography, as well as photographic books and photo-based magazines.

The expanded scope of exhibitors this year includes greater international breadth with Stephen Bulger Gallery from Canada, Next Level Projects from London and Only Photography from Berlin. Returning this year are Gitterman Gallery and L. Parker Stephenson,both specializing in classic and mid-century work. New, and with a very strong representation of the best in contemporary photography, are Higher Pictures and Sasha Wolf Gallery. In nineteenth-century works the excellent program of Gary Edwards Gallery is expected from the DC area as well as Winter Works on Paper, a trailblazer in showing the best in vernacular photography. Rounding out the roster with books, limited edition prints and magazines are newcomers Blind Spot, and returning exhibitors Aperture Foundation and Spaces Corners, all with compelling programs of contemporary work.

10x10 American Photobooks is a multi-platform photobook event with a reading room, online component and publication that presents American artists’ photobooks from the last 25 years. The project previewed earlier this month in New York. It’s final destination will be the Tokyo Institute of Photography in September 2013.

Sunday, May 19   1:00pm
Notes From the Foundry, artists TBA
Signings will take place on at the Spaces Corners table

Pittsburgh exhibitor, Spaces Corners has a few special plans for the weekend, including the launch of two new books: Dangerous Women from the collection of Peter J. Cohen and Notes From the Foundry a group show in a book featuring the work of sixteen contemporary photographers. In addition to these exciting releases, Dutch photographer Charlotte Dumas, known for her portraits of animals, will be signing copies of her newest book, Anima - a portrait series of the burial horses at Arlington National Cemetery photographed at night while resting.

GOOD EATSFood will be generously provided by Kevin Sousa and Salt of the Earth all weekend long. Among the many delicious offerings, the onsite brick oven will be turning out made-to order pizzas, and Union Pig and Chicken will be roasting whole pigs. Thanks to all of our generous sponsors that helped make our event possible this year. We hope to see you in a few short days! 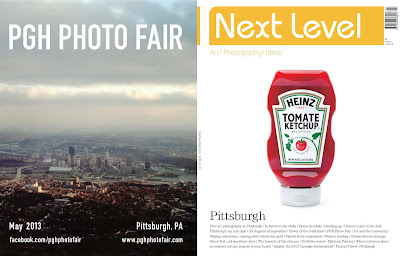 Two years ago during  Paris Photo, I was having a chat with Sheyi Bankale, the editor of Next Level magazine. He told me that the magazine was starting to focus on doing city editions, especially cities that have a developing photo/art scene. I suggested that Pittsburgh fit the bill very well. We decided to bring Sheyi to Pittsburgh to check it all out.


Fast forward a year or so later and the Pittsburgh edition of Next Level magazine is on the shelves with the fabulous work of Tomoko Sawada on the cover. I've got to say, I'm thrilled that Sheyi (with a little help from me) was able to make it happen with the involvement of a small army of writers, artists, foundations, and miscellaneous good-hearted folks.

So, Sheyi and I wanted to throw a "Thank You Pittsburgh" party and to invite all of the folks that had a hand in the edition who might be able to be in Pittsburgh on May 16th. Happily, this coincides with the launch of the 2nd edition of the PGH Photo Fair which will take place that weekend on May 18-19 and in which Next Level will be one of the exhibitors.

We have lots of fabulous contributors to the evening: light bites will be provided by Salt of the Earth, beer is provided by Penn Brewery,  and cocktails are provided by Clique Vodka. Copies of the Next Level Edition will be available. Nakturnal is handling the details of the event, so you know that the dj and ambience will be cool and fun.

More details are on our facebook page (friend us!!) and we look forward to raising a toast to all our Pittsburgh friends who made the issue possible. Thank you!
Posted by Evan Mirapaul at 10:58 PM No comments:

Posted by Evan Mirapaul at 7:59 PM No comments:

As the PGH Photo Fair draws near, please join us for the final event in our Speaker Series as we welcome New York-based photo conservators, Nora Kennedy & Peter Mustardo.

Nora Kennedy & Peter Mustardo are at the very top of their field. Ms. Kennedy is the Sherman Fairchild Conservator of Photographs at the The Metropolitan Museum of Art in New York City and on the adjunct faculty at New York University's Institute of Fine Arts. Mr. Mustardo is the co-founder with Ms Kennedy of The Better Image which is one among the top conservation firms in the world. At any given time, his studio is occupied with masterpieces from major museums and collections.

The talk will be held at The Carnegie Museum of Art Theater on Wednesday, May 8, 2013 at 4400 Forbes Avenue. The talk will begin at 7pm. Join us before for refreshments at a cash bar and take a peek at the "Oh Snap" photography show off the lobby of the museum. . This event is free and open to the public. Come support our final event and hear the latest updates about the opening of the PGH Photo Fair just one short week later!

While conservation may seem like an arcane, "insider baseball" topic, it's not. To anyone who is interested in making, owning, or showing photography, it is a help to also know how to take care of the work in their possession.

Photograph Conservators Nora Kennedy and Peter Mustardo will describe their adventures preserving photographic works of art at The Metropolitan Museum and in private practice at The Better Image, respectively. Working closely for over thirty years, this professional couple has actively shaped the coming of age of the nascent field of photograph conservation and is currently involved in photograph preservation initiatives internationally. Go “behind the scenes” to learn about large-scale installations of a diazo collage by Francesca Woodman and Richard Avedon’s photomurals at the Metropolitan, and the recovery of works of both high and vernacular photography after ‘Superstorm’ Sandy at The Better Image. Discover the advantages offered by scientific analysis to unravel secrets of artist’s techniques and keys to the conservation of our photographic heritage as well as contemporary photographic art.

We learned from our last speaker, David Howe, that works from his collection that were damaged by the flooding caused by Hurricane Sandy are now being restored by Mr Mustardo and Ms Kennedy. It's an unfortunate coincidence that illustrated just how personal the field of conservation can be.

Posted by Evan Mirapaul at 5:18 PM No comments: